Candy Review: As Close to Going Green As I'll Ever Get

One of the many cherished memories of my childhood was the post-Easter Blowout. Yeah, getting an Easter basket was pretty awesome when you're a kid (also, as an adult) but going to a store the day after and just absolutely load up on 75% off candy--that was a real treasure. (Okay, for some people getting candy for free is better than paying a lot less for candy than you should, but shut up.) There was a particular store, the now-defunct department store Gee Bees, that for some reason always had the best two things ever: 1) awesome post-Easter candy 2) really cheap.

Apparently, back in the day, department stores had a huge problem concerning logistics, because every year they would absolutely destroy the target of exactly how many of each type of candy would be purchased that year. It was always very spectacularly wrong, and they would have to liquidate all their malted eggs and powder blue Twix bars because seriously, who wants to eat that stuff in June?

Alas, Wal-Mart came along with their computers and their just-in-time logistics, and now the day-after sales look like a Chernobyl marketplace--bare shelves filled with the absolute bottom crumbs of the Easter candy pyramid: paraffin lollipops shaped like the fourth lead on How To Tame Your Dragon's head, perhaps, or white chocolate Cadbury Eggs with blackberry filling.

Yet, every year, I make the attempt to scoop up Easter Candy savings with as much glee as if I had just won the Powerball. A futile attempt nowadays, though I occasionally score with a stale-dated peanut-butter filled rabbit or a coconut egg.

This year, though, I found the greatest. candy. ever. 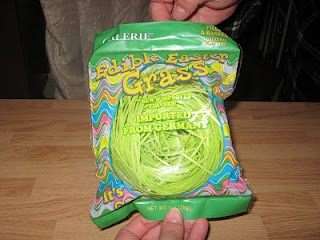 Pictured: Big Bag of Awesome
is what I found. Edible Easter grass.

I snagged this candy the day after Easter but, as you can see, I'm just now getting around to trying it. Suffice it to say I didn't really expect having it sit around on my table a couple of weeks was going to affect its quality at all.

First, let's explore the packaging. Now, the packaging has a lot going for it. The fact that this was, like, fifteen cents was merely a tertiary concern of mine. I would have picked it up had it costs significantly more, like a dollar. I was initially turned on--but not sold--when I found out it was 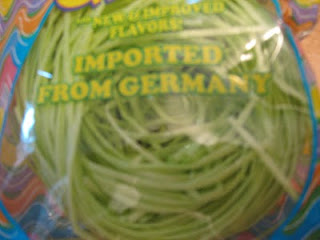 From the nation that brought you Nena, the Shamwow, and Heinrich Himmler.
Imported from Germany! Wow! And this was a selling point impressive enough to use Cooper font and slap on the center of the packaging. So I was...intrigued. But then I found out that 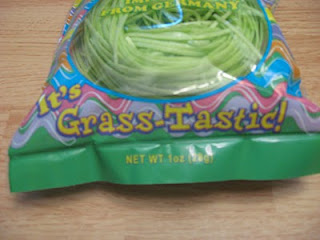 Grass-tastic? You don't say. Made up words are even better when they vaguely sound like real words. I was hooked.
Surprisingly, there were still plenty of packages available. Unfortunately, it didn't seem like it came in blue or pink like most other Easter basket grass, presumably because they wanted to maintain the integrity of the product and not turn into a farce.
I brought it home and, finally, I cracked it open tonight. I wasn't exactly sure what to expect. I don't anticipate that Cadbury Eggs will taste like real eggs, nor do I expect Easter bunnies to taste like hasenpfeffer. And yet I was 90% convinced that this was going to taste like genuine grass.
No need to worry. The packaging makes it clear: This is Sour Apple flavored. Thank goodness, since the only other green colored flavors are watermelon and lime, and had it been watermelon there would have been hell to pay.
Of course, the packaging also states that it is a "new, improved" flavor, so I half suspect that this stuff at one point in the production cycle did, in fact, taste like my lawn.
But not tonight! No, I opened the package up with eager anticipation, with my wife nearby to make sure I didn't run off with it to Vegas. 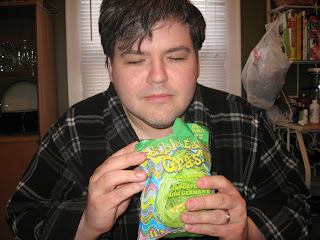 Ah, the sweet, sweet aroma of corn starch and thickening agents
Well, it smelled like...well, apples. Very faintly like apples, like maybe apple juice that has been diluted with a gallon of water. 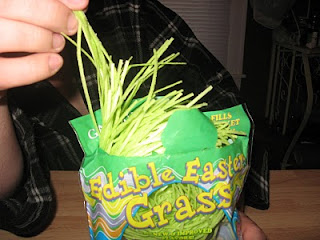 I immediately wanted to bale this. Does that make me a bad person?
I began to worry, just a bit. At first I thought this was fun, but, um, then I realized I was going to eat something that was deliberately created to resemble something cows need seven stomachs to digest. I was having second thoughts. 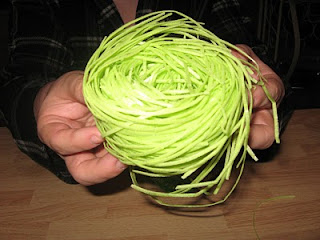 This didn't help.
You know, in the history of mankind, I do not believe that two hungry diners sat down across from one another at a table, and one looked to the other and stated in all seriousness: "You know what I'd like to voluntarily put in my stomach? A bird's nest."
Still, it did still smell like there might have been apples in another room somewhere, so from a strict culinary standpoint we were on solid ground. I dove in like it was a taspar egg. 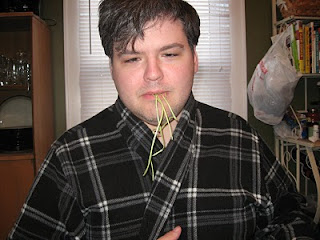 Or not.
It tasted...flat. Almost like there was no taste, except--like the smell--a faint apple taste. It wasn't, alas, particularly sour. Sourness can save the creepiest of off-season holiday candy. 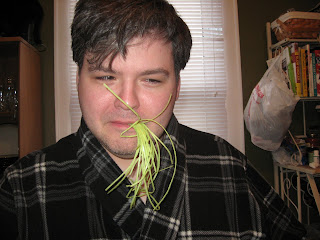 It wasn't really all that bad. But it's not exactly something I would buy to replace a Snickers bar or anything.
My wife commented that it tasted quite similar to "sour apple flavored communion bread." So, you know, there's that.
I was half tempted to eat a lot of it at once; perhaps the flavor increases with volume. But then I had sudden nightmares of Shrek coming out my other end and wisely chose to forgo that part of my taste test.
So there is was. Unfortunately, there was a TON of it, and of course we weren't going to throw fake edible grass from Germany away in the TRASH, so we sealed it up for future consumption. 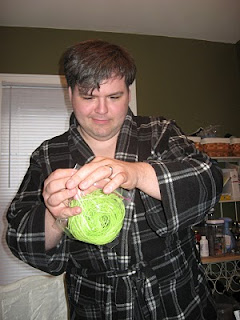 We are going to save this for Burning Man.
The bottom line? It was certainly worth fifteen cents.
Posted by Crank Crank Revolution at 8:26 PM