The Downfall of Downfall

Well, those Downfall parody videos have been pulled from YouTube, which is a shame.

They existed for quite some time before I knew of them. For those who don't know, this internet meme basically a clip from the Academy Award nominated film depicting Adolf Hitler and his staff, backed into their underground bunker, being told about the latest bad news from the war front. The subtitles are changed in a humorous manner about contemporary politics and pop culture, converting the film's heavy drama and expert cinematography into a light farce. The subjects that Hitler discusses with the staff are varied and numerous, from the 2008 Democratic primary to the death of Michael Jackson; the first one I saw involved the Patriots losing the Superbowl during their otherwise perfect season.

The film company that owns the rights objected to the proliferation of the clips; since they are relatively cheap and easy to make, there are hundreds of them of varying quality. Since the company owns the copyright, they requested that YouTube take the clips down. The Anti-Defamation League also objected, saying that it trivializes the Nazi atrocities.

One could argue that it's not copyright infringement at all, since it surely falls into at least the parody or the fair use exceptions. And while the article referenced above states that DVD sales aren't up as a result of these parodies, I can guarantee more people know about the movie that previously. (My wife can attest to the movie's quality--I haven't seen it yet--but if you're so inclined, have at it

The director of the film, however, has a better view that closely mirrors mine. Oliver Hirschbiegel's quote: "The point of the film was to kick these terrible people off the throne that made them demons, making them real and their actions into reality. I think it's only fair if now it's taken as part of our history, and used for whatever purposes people like." 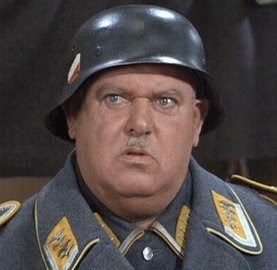 I see nothink! No, seriously, I had it saved as a favorite and now it's gone. Hooogan!
Converting Nazis into lightweight buffoons is hardly a new phenomenon; not every portrayal of World War II needs to be heavy-handed melodrama to point out that (news flash!) the Nazis were the bad guys. I'd like to think that we've advanced far enough into Western culture to believe that respecting the horrors of history--including but not limited to WWII--is not mutually exclusive with using parody and satire that isn't a direct mirror reflection of its source material.

Besides, if this is a fight that the Anti-Defamation League feels is important, one would think they're running out of work to do. If only that were the case.
Posted by Crank Crank Revolution at 10:21 PM