I just returned from a trip to Maryland--something I will write more about at length later--but I would like to point out that my wife and I went geocaching. I love geocaching, but finding a time when the weather is right and everyone involved can go at the same time can be daunting. I've had a busy past year, so the number of geocaches I've managed to find in the last 12 months or so can be counted on about half a hand. I'm hoping to do it more often, and we'll see what the summer brings now that things have kind of settled down. 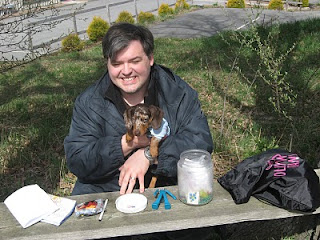 Hello, I'm Geocache
For the record, that is me with (as always) my eyes closed, and my dog Dexter. Also we're about to pull a Dexter

(of the Showtime series variety) on Gumby there; I'm just waiting for my wife to get a roll of Saran Wrap and a putty knife ready.
Not sure what geocaching is? Look here. It's one of the few activities where being an outdoorsy type as well as a total nerd clash in a huge explosion of awesomeness. If you're not convinced, keep in mind that my wife thought it was the most absurd this she's ever heard, then a year later was converted much like Paul.
The first geocache we attempted while on vacation in Maryland appeared, upon closer inspection, to be on private property. I know how things operate on the eastern seaboard, and I wasn't sure if being in the panhandle would  be much different--I assumed we would be shot by a legally owned handgun as opposed to an illegally owned one. So we quickly moved on to the second one, which is the one pictured above. This was full of awesome stuff--a map of Rome, a guitar pick from Austin, Texas, etc. We ended up taking the travel bug (which is the first one we've ever encountered), which was attached to the aforementioned Gumby.
It was fun, and I'm looking forward to resuming geocaching this summer. My wife bought me a make-your-own-geocache kit for Christmas two years ago but we haven't gotten around to planting it yet. I'm looking forward to it, as well as teaching some friends about it. We shall see.
Posted by Crank Crank Revolution at 10:42 PM