So as I mentioned in an earlier post, my wife and I went for a short trip to Deep Creek, Maryland for her birthday. We started by looking for pet-friendly locations--Dexter not yet realizing he was going on his very first trip--and ended up at the Wisp Resort. For short trips like this, we don't tend to plan a whole lot; we mostly see what is in the area and then schedule ourselves accordingly.

We did plan on doing two things: geocaching (see the earlier post) and a visit to some civil war battlefields, namely Antietam and Harper's Ferry.

We took my wife's car, which is an awesome car but is not one that I am used to driving. It's a lot heavier than my car, which is this tiny little Cobalt we've named Sandy.

Yeah, you'll date that Camero, but you'll marry me.
So, anyway, I learned quite a few things on this trip, such as:
1. Maryland driving are complete asshats.
Okay, a clarification, but not much of one: individuals driving on the Maryland freeways are complete asshats. I was driving a car I'm not used to and driving through what signs were clearly pointing out to be 8% grades, but drivers behind me refused to 1) not get right up to my bumper and turn on the crank; or 2) pass. I don't get it, so I am throwing a pox upon the Free State for having such asshattish drivers.
Also, for some reason, Maryland insists on putting these crazy little right-hand lanes that last for like a hundred yards. They're not really all that useful for passing, they're not a place you can pull off or park, and there is a perfectly serviceable left lane for everyone to get on. I'm not sure what their purpose was except to get whatever they call PennDOT in Maryland some time and a half.
Anyway, driving aside, the vacation was immensely awesome. The resort we stayed at was extraordinarily nice--they catered to the dog, and were very professional. It also helped that it was the off-season, so the room was cheaper and there weren't that many individuals staying there. One night we spoke with the maintenance guy and he told us all of the things they were planning to expand on--new exercise machines and new events.
The day after we arrived on Saturday we went to tour the civil war battlefields. The weather wasn't bad but the wind was biting cold; when we got to Antietam, however, it turns out there's a fairly well-organized driving tour. Turned out to be the best mix of indoor and outdoor sightseeing. The setup of the battlefield was very user-friendly, and we only skipped one of the eleven stops. 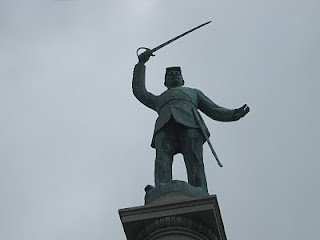 This is either a Northern or a Southern monument. I was too scared to find out for certain.
Dexter, of course, loved it. We were both kind of nervous, because he hadn't been taking to the leash all that well. Our fears, thankfully, were unfounded; he had no problem walking along the paths and sightseeing with us, and, in his spare time, running reconnaissance for McClelland. 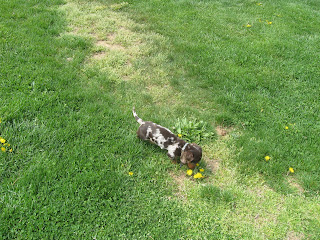 Take that, Johnny Reb!
We next stopped at Burkittsville to scope out any Blair Witches. Follow that link for my wife's take on it.
Harper's Ferry was a little bit of a disappointment. It was later in the afternoon, and when I asked the state park worker whether there was a driving tour, he said the only practical way to see anything was by tour bus. To be fair, the bus was free and ran every fifteen minutes, but Dexter wasn't allowed, and neither of us was in the mood. So we drove to a few of the spots and looked things over.
The next day we went to a few of the waterfalls in the area. I love seeing these falls, especially if there aren't too many people about. 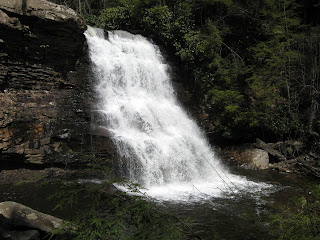 Slowly I turned...
I have to hand it to whoever is in charge of such things--the falls we saw here in Maryland an in the Poconos take pretty good care of it. They're organized well and look very nice. The paths were well-maintained and sturdy.
Well, if you want them to be. We took the easy path to Swallow Falls, but on the way back for some reason we took the path less traveled. An easy recollection of the path map would tell us to turn around and go the way we came, but all three of us took the other, longer, harder, more painful path. Go us! In addition, there were plenty of scary-looking boulder placements that look like some sort of trick from a Looney Tunes cartoon. 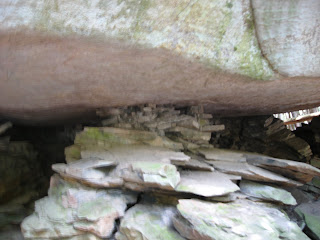 This state park has been made possible by funding from the Acme corporation.
We also stopped at the beach, which was both fun and relaxing. And cold. So, so cold. We also bought way too much flavored popcorn and fudge, and ended up winning a free pastry at a local non-chain coffee shop, where I also unsuccessfully lobbied my wife to purchase a pink "Caffeine Queen" T-shirt.
On the last day we went geocaching (see link above). Then we packed up and went home, where I tried that ridiculous KFC Double Down sandwich (meh) and also at the Sarris ice cream parlor and candy shop where all the ladies (and--admit it--men) just went nuts over the dog. (The ice cream is divine there and almost made me cry like a woman. Almost.)
It was a fun and relaxing trip, and certainly a good way to get away from the responsibility of work for a bit. I was also impressed how well Dexter behaved; he was a good little dog. I'm sure, like me, he can't wait until the next trip.
(See my wife's blog here for some more pictures that don't have dispassionate snarky comments.)
Posted by Crank Crank Revolution at 9:49 PM