When it comes to professional sports, I am a bit of a sucker for the underdog. Not terribly so--I'll root for my Pittsburgh Penguins and Steelers (and I suppose Pirates, if requested under pressure), but all other things being equal I'll throw my lot in to those expansion teams and small-market clubs that rarely get traction and don't have the long-standing cultural impact to their cities.

For example, the Cinderella story this year in the NHL playoffs are the Phoenix Coyotes. First off, why does Phoenix have a hockey team, while perfectly good hockey towns like Seattle, Hartford, Winnipeg, and Hamilton settle for minor league teams? They're in the DESERT, for crying out loud. 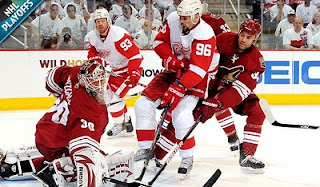 Dry ice, anyone?
Anyway, they're the perfect underdog. Last year the team almost folded--the finances of the franchise were quite poor in the sense that players were being paid in land abatements and poutine. They finish near the bottom of the league fairly consistently. But this year, it was a new coach and a new owner (alas, the new owner was the NHL itself, sort of a screwed-up version of a hockey foreclosure) and they managed to place a respectable fourth in the western conference. As of this writing, they've won one game against Detroit, but are losing in the 3rd period in the second game. Even if they don't win the series, it's a start.
I'm not sure why; I know everyone has fondness for the little team that could. But I don't quite feel the same about, say, high school basketball or minor league baseball or college football. I guess in my mind the quality of the teams are so varied and the rosters fluctuate so much  that true underdogs are hard to identify, and many people simply convince themselves that their favorite unknown team is going to stick it to the reigning champ.
Usually, it's a lost cause. While I have a soft spot for the Columbus Blue Jackets or the Tampa Bay Rays or the Detroit Lions, the numbers usually don't pan out quite as expected. It feels good to root for the little guy, even more so when they beat the spread.
Posted by Crank Crank Revolution at 12:46 AM