Okay. So it's only, like twenty games into the season, and there's something like three thousand games yet to go. I know that there's a lot of promising talent yet to manifest itself on the field. I know there are a lot of nuances and ambiguity in the game of baseball that I'm not familiar with. And yet I decree forthwith that the Pittsburgh Pirates are the absolute worst team in the history of organized sports, QED.

I'm not a huge baseball fan, in the sense that I am not a baseball fan at all. I mean, sure I'll go to the ball park and take in a game or two a year, but I go for the hot dogs and get my money's worth out of the taxpayer boondoggle known as the otherwise fantastic PNC Park. Baseball just doesn't do much for me. I'm sure that part of my aversion to the sport is because I grew up with the losingest team in any of the four major sports--the Pirates have the longest non-winning streak of all of them. This includes the Detroit Lions. The Minnesota Timberwolves. The Toronto Maple Leafs. Not even the much-maligned Chicago Cubs. Of all the teams of all the sports, the Pirates haven't cracked .500 in seventeen years. Sev. En. Teen. Years.

This is appalling. If they were a real business they would have folded up decades ago. This season started with a little bit of promise, getting a few impressive homers from Garrett Jones. But it's all gone downhill from there. Look at these selected scores from last week or so: (I skipped some, but suffice it to say they were all losses):

Now, it may seem like perhaps the Milwaukee Brewers are a good team. They are, but I assure you: the Pirates suck against pretty much everyone. And I say that not to take anything away from the fine club they have in Wisconsin, but only to emphasize the sheer magnitude of the complete train wreck that is the Pirates.

These are not normal-person scores. These are grade A class 1 five-alarm complete imaginary scores. These are scores that small children who have no concept of competitive sports come up with in their front yard when they pretend to be the star of their local franchise. These are Little League scores. 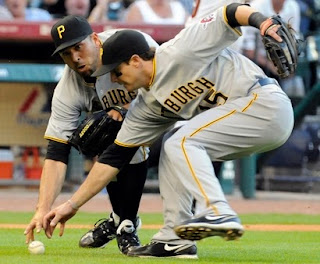 Can we all get ice cream after the game?
I'm not going to dwell any longer, mostly because I don't know enough about baseball to come up with any fixes or criticism or valid points to bring up. It's an embarrassment, along with certain star members of certain other professional sports organizations in the city whose last name may or may not rhyme with the word Toethlisberger. The best thing that can be said is that it makes me all the more thankful for the NHL playoffs.
Posted by Crank Crank Revolution at 7:45 PM