As a child, I was never particularly interested in the Civil War. I mean, yeah, Abraham Lincoln was the shiznit and all, but I was more interested in, say, Andrew Jackson, who as far as I could tell shot bystanders for sport, or Teddy Roosevelt, who ate Rhino Macs for breakfast. Lincoln just kind of seemed like that tall, lanky kid that won the class presidency but still got picked last in gym. And the battles and the legislation and everything just kind of made me...well, bored. It just wasn't my thing.

But then a few years later something clicked. I don't remember what it was--a story I read, or a clip of documentary on the History Channel, or what--but I suddenly became quite interested. I read voraciously about the Civil War. I was still more interested in the political and social aspects of it than the military, but I was interested in it all. I'm not going to suit up and fire fake musket juice at five in the morning or anything, but it was enough to pique my interest. 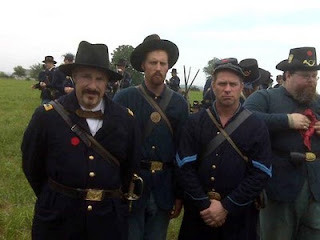 , I wasn't sure what to think. The entire genre of historical horror didn't particularly appeal to me--I kind of assumed it was a one-off joke that wouldn't really take off. On the other hand, the entire concept of having Honest Abe splitting more than rails just seemed kinda cool.
Well, the book is kinda cool. It's actually a very good book--and also a very somber one. Unlike some of the other books of this type, it's not particularly camp or a spoof, it reads just like a historical biography would, except for all the--you know, vampires.
I'm not going to go into the plot of the book, mostly because it's more fun to read it. Basically, many major events of our American history somehow involved vampires, and author Seth Graham-Smith makes it reasonably plausible. It reads like a biography of his life, but (of course) emphasizes the vampire hunt. However, you don't really notice it, since it's integrated nicely into Abe's life--nothing really seems forced.
The book is a fast read--not because it's shallow, but it flows nicely. Excerpts from Lincoln's "diary" and intertwined with the narrative, which moves the book along fairly well. In addition, Lincoln's vampire hunts are usually quite exciting. The excerpts are written pretty much exactly as you would expect from someone of that era--the phraseology and terminology seem authentic.
And, quite frankly, there's just something awesome about ole Abe Lincoln chopping up vampires for the good of the country.

I will emancipate your head from the rest of your body.
The book isn't perfect--some things are tidied up a bit too nice, and certain plot devices are rushed to a conclusion without adequate exposition. And some things (specifically the motivation of certain characters) are left unattended. Still, these are minor gripes; the book is definitely a recommendation.
I'm not certain this book would exist in any other time frame. It would have been nice to see this book predate the current vampire craze, but on the other hand I doubt it would have sold as well. There is a movie in the works, which I think should be pretty good, but we'll see.
Posted by Crank Crank Revolution at 7:02 AM