Last week, my wife and I went to go see the new Alice in Wonderland in Butler, a creepy and underwhelming experience.(Although it was nice to see Johnny Depp finally star in a Tim Burton film.)

On the way out, however, I was stopped in my tracks. Unnoticed previous to me, the theater had one of these: 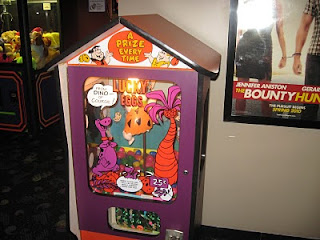 One of these days, Alice...
It is a Lucky Egg Flintstones vending machine! Holy cats!

When I was a kid, I absolutely loved these. Basically all it is is a cheap plastic toy vending machine. You slip in a quarter, Fred Flintstone spins around declaring that, indeed, Yabba Dabba does in fact do, then an egg comes out with some odd toy of some sort, like a spider ring or a temporary tattoo.

I loved it when I was a kid because when the guidance counselor of our school would ask us what we wanted to be when we grow up, I authoritatively declared that I wanted to pursue a career as a dinosaur. And I was always lukewarm when it came to the Flintstones, because it was all about going to the about the Water Buffalo Lodge or cranking about getting a raise from Mr. Slate, when I just wanted to see Dino run around like an idiot barking at the mailman.

But this vending machine was awesome, because while it was Fred twirling around, it was a big ole picture of Dino, looking proud like a new father, laying eggs for a quarter apiece like a rogue Duggar, that caught my attention. 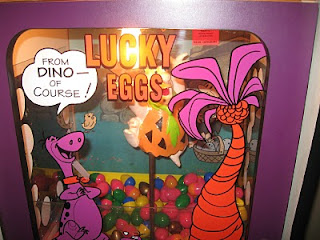 I've got eeeeeggs! And I know how to use them!
Of course, this confused me even more, because all signs pointed to Dino being kind of a dude, but I let it slide because dinosaurs were somehow related to birds and grew spikes on their backs so I wasn't exactly certain what was going on in the field of prehistoric physiology.

In fact, at one point years ago I ran into this machine at a local grocery store, since out of business, and I asked to speak to the manager to see if I could buy the machine; I assumed I could get it on the cheap since no one ever used it. It sat neglected in an odd corner of the store. Sadly he informed me that it was leased by the vending machine company and he was not in a position to sell it to me, and it was unlikely that they would part ways with it. I refused to believe this, since I'm pretty sure that not a single child in a decade had wanted Dino's dried up eggs, but I resigned myself that perhaps it was best that I let this one thing fade wistfully into nostalgia.

So it was a bit of a treat to see the thing, still up and pumping out eggs, at a second-run movie theater twenty miles away. I even suspect it's the same machine, but who knows. Of course, I had to see what Dino had to offer me after all these years: 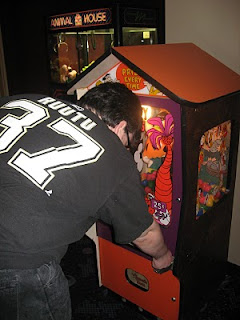 C'mon! Daddy needs a Greek government-issued bond!
What Dino had to offer was a ring. Two, to be exact, one with a pink penguin and one with a blue turtle, which makes sense. In the end, everyone was happy, and I expect to see the machine next at Ollie's, or perhaps Big Lots. We shall see what happens by the next Ice Age.
Posted by Crank Crank Revolution at 12:32 PM