The Economist is a British magazine; despite its title, it's not necessarily about economics but more like a slightly heavier Newsweek. It focuses a little bit more on Europe and finance, but usually has a large amount of American coverage that I find it just the right balance.

Anyway, the editors have a particularly British sense of humor--it even pervades the writing of otherwise completely serious articles, and I love it. But they also put effort in their covers, like the current week's: 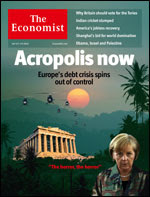 You may have to click to enlarge it. Granted, for those of you who switch to SpongeBob SquarePants when they start talking about the Greek Debt Crisis--and I don't blame you one bit--this cover may not seem particularly amusing. But it just about made my day. That makes me a bad person.
Posted by Crank Crank Revolution at 6:32 AM