Two separate yet equally important events occurred in my life recently, but to place them in the proper context, it may be essential to review some of the more culturally significant areas of Western Culture.

It all started with a small character named Jumpman, who made his debut rescuing the ever-distressed Pauline from a huge ape who was called, inexplicably, Donkey Kong. As will become evident soon, Japanese culture is easily defined as being knock-down crazy all around. 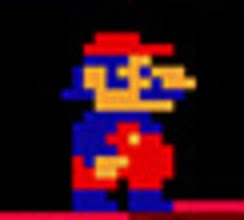 Donkey + Kong = Donkey Kong. So Jump + Man = Jumpman! I Rike!
The little guy became wildly popular. I mean, why not? If people can fall in love with a gob of yellow that gets his rocks off eating a thousand little pellets of sugar pills, why not a lowly plumber who hops over barrels and dodges jacks that for some reason bounce?

Soon, Jumpman became Mario and--while it has never been officially declared--the suffering Pauline turned into Princess Toadstool, and finally Princess Peach. OK, so that's a bit of a stretch, but if that noisy tart who carelessly lets her umbrella and purse lay about in construction zones isn't already acting like royalty, I don't know who would.

You better have dinner ready when I get home after all this. And nothing with mushrooms, either. I get enough of that horseshit at work.
Mario, his brother Luigi, and a host of other creepy Japanese characters became a best-selling franchise, and has become the flagship franchise for the Nintendo corporation, and has been a money maker beyond the video game industry, form lunchboxes and candy to apparel and plush toys.

Which brings us to the first seminal event of importance. My wife found on the view it now on Netflix all of the old Super Mario Brother Super Show cartoons, which was part badly-animated cartoon and part live-action sitcom. Mario was played by none other than the great Captain Lou Albano.

This show was just absurd. The live action segments were absolutely ridiculous, in a shamelessly charming way. These two guys basically spend their time cooking pizzas and plunging, something ridiculous would happen, and eventually some famous teen star from the late 80's would be involved, such as Winnie Cooper needing her toilet unclogged.

The cartoon itself was kind of...eh. First off, in each show, Mario and Luigi would engage "Pasta Power" by playing pattycake with new, hip, updated lyrics. Pasta Power would allow them to jump higher, run faster, and make better automobiles than the Americans. This was a completely nonsensical addition. In a world where eating mushrooms made you grow and chomping on flowers made you shoot fireballs from your fists, did they really need to add a playground chant that wasn't cool even when you were six?

The second reason that the cartoon was subpar was that a majority of the enemies and backgrounds were pulled from the awful Super Mario Brothers 2, the Godfather Part III of video games. 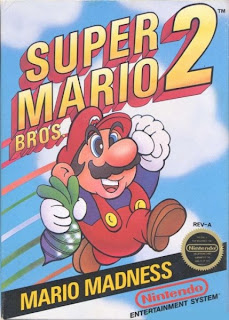 This made children cry and grown men curse the sky
So, yeah, there were Koopa Troopas and Bullet Bills, but there were a lot more Shy Guys, turnips, and Birdos. In an unrelated note, Super Mario Brothers 2 was released the same year as the debut of the cartoon.
The second major event is this game that has been circulating around the internet.
If, like me, you used to have free time, you no longer do.
Posted by Crank Crank Revolution at 9:53 PM