My Wife Is Sick

My wife is sick.

This isn't the usual "I have a cold because I don't want to play Super Smash Brothers with you right now" sick, this is a Grade-A Class-One Four-Alarm sickness. If my wife were a cartoon, the liquid in the thermometer would burst through the top and little green wavy lines would be permeating from the top of her head.

I've tried to accommodate her the best I can, but, unfortunately, the tales of my healing prowess have been quite exaggerated, as we shall see below. About all I'm able to cure is a case of the Run Down To Sheetz And Get Me A Mint Mocha, which if I do say so myself I do end up doing pretty well.

But I feel infinitely bad for my wife. She felt so bad that her preferred method of travel from our upstairs to our living room is to slide down the stairs like a five year old. I caught her slowly descending the stairs with the saddest look of forlornity* on her face.

I couldn't face that happening again. So on a subsequent trip when she needed to go upstairs to take a bath, I wasn't sure exactly what method she had devised, so I volunteered to carry her up. She locked her arms around my neck and I slowly pulled her to the stairs, and one by one we went up each step. I'm not so sure it helped but it did get her up the steps, so I'm claiming a win on this one.

Of course, I wasn't the only one to try and help. Our cat Nora gave it her best shot. My wife, curled up in bed and reading a good Sunday afternoon sickness recovery book, felt Nora creep up to snuggle next to her. Our cat has been a bit of a hot crank lately, but she can always tell when Mommy is sick. (She does not, alas, do the same for me; I will always be the interloper who only feeds, waters, and pets her.) So even though she's a little under the weather herself (she has a bad case of the feline hormone disease or whatever its scientific name is) she laid a single solitary paw on my wife. It was part empathic harmony and part Benny Hinn. 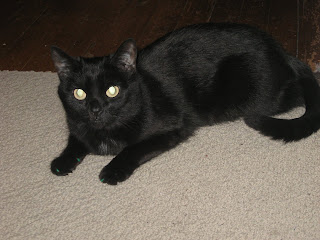 Please send me ten percent of your fish sticks and catnip-laced stuffed mice shaped like bumblebees, and you too shall be hay-eled
Despite her best intentions, Nora did not make my wife's sickness disappear. So we had to take the next step--rampant pharmaceuticals. I basically picked up everything that was street legal at the store and brought it home like the world's worst junkie.

My wife looked it over.

"I'm going to dissolve the Alka-Seltzer Plus Cold and Flu in the Tylenol Night Time Cool Mint Syrup, then take a Sudafed chaser."

This did not seem to be the worst idea ever. I was, in fact, going to be sleeping with her in the same house tonight.


She felt so bad that she made up a song about how she felt. She started singing "I'm Pitiful," a parody of James Blunt's "You're Beautiful." It was a very pretty song the way she sang it, but I couldn't really break it to her that Weird Al already did that.** I didn't want her to try and mend her broken heart with more Vick's Vap-O-Rub and NyQuil Sinus Formula.


So in one last attempt to have her feel better, I decided to take our mini dachshund Dexter with me to my mother's house to give my wife some peace and quiet. She claims it was because Dexter was fussy all day, but I'm pretty sure it was me trying about every ten minutes to convince her that baking me chocolate chip cookies was a good way to cure a cold. Either way, it got us both out of the house for a couple of hours.

Unfortunately, it turns out my wife wasn't the only one with a touch of something. After driving for all of what seems like twenty seconds, my poor dog vomited in my car. I'm going to chalk this one up to a rather vigorous walk and subsequent water drenching coupled with a bumpy car ride, but I'm pretty sure he just wanted to see exactly how bad he could make me feel, because I felt about two inches tall. 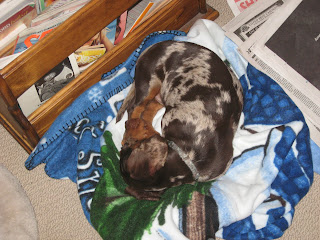 Daddy, I'm sorry I urped all over the front seat of your Chevy Cobalt. I'm sure it knocked nearly a dozen dollars off of its blue book value.
Of course, since I couldn't make my wife no longer sick, I could at least try and make it as pleasant as possible. I had been jonesing for some cereal lately, so I decided that while I was in the appropriate aisle I would get my wife some of her favorite cereal. So when I got home and put groceries away, I proudly held up the box to show her that I got her some of her favoritist*** part of a complete breakfast, Cinnamon Toast Crunch. It was almost a second later--and most certainly not an hour before when I was picking it up at the grocery store--when my brain reminded me that she actually does not like Cinnamon Toast Crunch at all, but it's Golden Grahams she craves. I even sang the damn jingle to her to make it more romantic****. 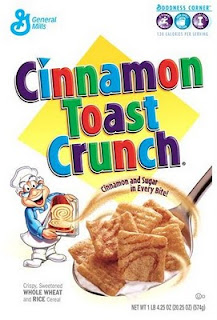 Cinnamon...Toast...DAMMIT!
Here I thought I was going to get all these Awesome Husband Experience Points and maybe even level up, but I actually ended up making it worse, because even though she won't admit it I know that while she wasn't hungry for Golden Grahams before, she's sure as shit hungry for it NOW. I am SO SCREWED if she ever gets pregnant. She'll crave pizza rolls and pretzel flavored ice cream, and I'll come home with fresh mangos and a chicken salad sandwich.
So my attempts at making my wife as comfortable as possible during her sickness has not been going well. I certainly hope she gets better soon, because I'm afraid that my abilities may have mostly been taxed to the limit. She may send me to the clinic and I'll end up bringing home a giraffe hide snuggie and a composting kit. And I can only hope that this is why my wife puts up with me.
* This is not, technically, a word.
** I did anyway.
*** This is also not, technically, a word.
**** Sadly, this is true.
Posted by Crank Crank Revolution at 9:31 PM