Little Orphan Annie, who has been gracing our comics pages for over eight decades, is gone.

I was never a fan of Little Orphan Annie. She kind of creeped me out. And don't lie--she creeped you out, too. She kinda creeped everyone out with the possible exception of Daddy Warbucks, and, well, my spidey sense tells me he's more on the creeper end of the spectrum than the creepee.

First off, Little Orphan Annie was sold to us on a lie. She wasn't an orphan! She had Daddy Warbucks! I suppose "Adopted Girl Who Has A Criminally Inattentive Father Figure of Great Means" doesn't sell too well in syndication. And yet she still tramped around with her mutt of a dog getting in scrapes and tribulations even though she would have been better off sitting at home eating pastries and learning Latin while the rest of the world was getting Great Depressioned.

And I just didn't like her looks. Her little red Jewfro and soulless blank-stare eyes made her look more like an early unfinished prototype of Vicki from Small Wonder than an orphan. I could never get past that, really. It's hard to look at her and think that of all the creative energy that could be poured into the early, lucrative days of the modern metropolitan newspaper, the best they could come up with is some carrot-topped dime-store albino who looked like a hypnotized whackadoo. 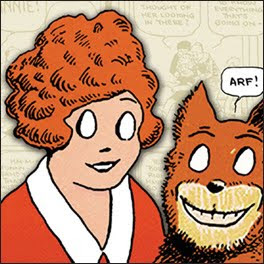 May I interest you in a copy of the Watchtower?
Of course, just like restaurants and the radio industry, I'm not quite sure I understand how the entire comics business works. News reports state that Annie was down to twenty newspaper subscribers at the time it was canceled. Unless the New York Post was chipping in free health coverage with the syndication rights, I can't figure out how one man could have made a living doing that, let along the team I'm sure they had working on it. Heck, I could get twenty subscribers just drawing pictures of random items on my desk so long as you don't care that these newspapers have the phrase "Free City Paper" right in their titles.

This is either the working man's struggle to come to terms with the stripping of self-identity in the modern industrial world, or the cup I hold all my pens in. Ombudsmen, contact me for my weekly rates!
I don't quite get who reads these things anymore, either. I can't figure out how Terry and the Pirates or Mark Freakin' Trail lasted as long as they did, and I am continually baffled as to who reads Archie comics anymore. I mean, really? Archie? Who's sitting in the treehouse waiting for that to show up on the drug store spiral rack?


So, anyway, farewell to Little Orphan Annie. I hope someone finally bought you some pupils.
Posted by Crank Crank Revolution at 11:27 PM