I don't get soccer.

I like to think of myself as being reasonably cosmopolitan when it comes to culture. I mean, sure, there isn't a whole lot of culture I admire that isn't Anglo in nature, but I'll at least give it a shot, or a glance, or a footnote, or learn enough about to drop randomly in conversation to prove to other people that I'm more intellectually superior than then even though I'm not.

Not in the I'm-so-confused sort of bafflement. I'm thinking more along the lines of how mind-numbingly boring it is. I tried, though. When the World Cup was played in America in the mid-90's, I tried to like soccer. I watched a few games and I remember purchasing soccer trading cards and I specifically remember buying a USA Today with the special World Cup insert so I could peruse it during study hall.

I tried. I really, really did.

I think it's the nature of the sport. Soccer is simple--just a ball, some nets, and a bunch of bucketheads. All of the proper elements are there, but every time I watch it I just don't get it. I mean, sure, basketball has the same amount of equipment, but at least someone is scoring every three seconds (at least those times when a foul isn't being called, which is every two seconds). But a sport with similar scoring--hockey--at least there is constant slap shots and checking going on, so even if there isn't any scoring going on, at least there are a bunch of current and former socialists slamming into each other.

In soccer, there's either scoring, or...running. Sometimes even the players get bored and pretend to be injured. 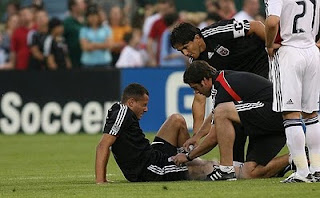 This is so going to hurt...my endorsement deal with PowerAde.
Even their league formats are all screwed up over there in Europe. There's something like eighteen different championships and about the same number of levels. It would be like the Kansas City Chiefs and Detroit Lions getting knocked down to a minor league football conference and the Baton Rogue Oil Slicks playing against the Spokane Unrepentant Hipsters in the Superbowl, but there would also be about six other Superbowls scattered throughout the year. Maybe it's just a cultural thing, but the thought of a minor league teams playing against a bunch of major league professionals just seems chaotic, unstructured, and wrong. 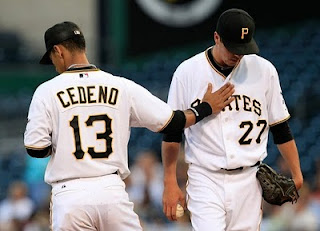 Exhibit A
At least the World Cup doesn't do that, and there's a clear winner at the end of everything. It doesn't bother me too terribly much, I guess; we have football, which the rest of the world outside of Canada and Australia find just as perplexing and, I'm certain, boring as I find soccer.
The level of enthusiasm for soccer in other parts of the world is hard to fathom for me. I mean, people go batshit nuts over here for sports, even so much in the sense that college football teams are leaving their current organizations to go to more lucrative conferences to make more money for their universities to prop up their academic programs that aren't getting any more money from the states or alumni because of the economy. So I can understand it. But it's almost like these countries add up all of the fan enthusiasm we Americans have for football, baseball, basketball, hockey, college sports, and NASCAR and funnel it all into one single sport, and their results are both parts fascinating and violent. It's just...nuts.
To each their own, of course. But, at the very least, thank goodness soccer isn't as boring as major league baseball.
Posted by Crank Crank Revolution at 6:42 AM