Most people view sarsaparilla as an American historical artifact: something that only exists in 60's westerns and occasionally at malt shops. But sarsaparilla is real, and it's here, and it is the awesome.

I drank my first drop of sarsaparilla quite a few years ago when I was in college. I had offhandedly made a remark that I had never had any, which made me fit in with 100% of the people in the world. The next weekend, a friend had happened across a six pack of the stuff when he was home in eastern PA and picked it up for me.

Fast forward ten years, and I'm sitting in my home, and I realize that there is nothing more in this world that I would like except a tall, cool bottle of sarsaparilla. I somehow got it in my head that my first fling with sarsaparilla didn't count--I drank it out of a can, and no reasonable human being could ever drink sarsaparilla out of anything except a bottle, presumably since half of the point in drinking it is, when finished, you can smash the bottle on the bar and start a fight at the saloon. And so I made it my personal vendetta against the carbonated beverage conglomerates that I would imbibe such a liquid treat as soon as possible.

Needless to say, sarsaparilla is not exactly something you'll find on the shelf at the corner 7-11.  In fact, it's doubtful most people have heard of it, or at the very least assume it was something that only existed locally in western markets. So when I started stopping at the trendy grocery stores (or at least the trendy sections of normal grocery stores), I got a lot of blank stares and empty turned-up palms.

Finally I called a local chain (McGinnis Sisters, for those keeping score at home), and even though I pressed 8 for Groceries I got 2 for Meat Products. Still, the nice young man who I assumed was holding a cleaver and a bloody white smock was ever so helpful ("Sarsaparilla? You mean like, to drink?") and, after a reasonable wait, was nice enough to confirm that yes, in fact, they carried sarsaparilla.

So I picked up a four pack of bottles (at, I might add, a buck twenty-five a bottle. Damn the man!) on my way home and went right to it.

The brand was called Sioux City Sarsaparilla. The packaging was...interesting. A very odd choice of old-west scenery and modern sideways typeface, trying to capture (I guess) the trendy nostalgic demographic. 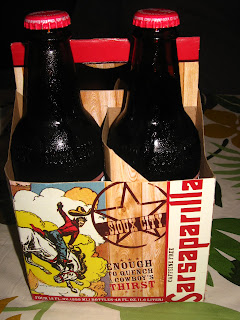 By the end of this review, I will have referred to this as Sioux Falls Sarsaparilla.
On a side note, the bottles were covered in a layer of dust. I am nothing if not cutting edge.

After the bottles got nice and cold in the fridge for a bit, I finally popped one open and took a nice, long drink. For those who don't know, sarsaparilla tastes like root beer.

Well, not quite. Sarsaparilla is a little smoother and, conversely, has a little bit of a bite in the aftertaste. Which--c'mon--saying that sarsaparilla is root beer with a stronger taste to it is like saying James Taylor rocked the roof off the dump because he did a Gordon Lightfoot cover. 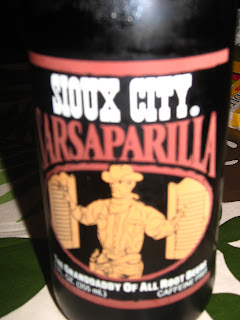 I'm my own grandpa.
Of course, it's impossible to drink sarsaparilla without invoking the old west, since they're the only ones in the history of the world that ever drank the stuff. It's very difficult to not drink this and put yourself in that time and place, like mint julips do for southern racetracks and steroid cocktails do for the Tour de France. 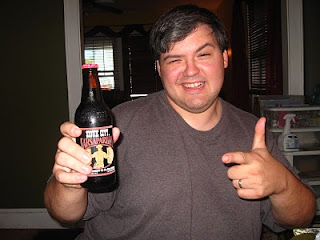 I have a sudden urge to attack some Indians and board all my enemies in a church and set it on fire. Eh, Blondie?
Don't get me wrong--the stuff is good, and I love drinking it. But the degree of separation between this stuff and a two liter of Hines is, well, about seventy-five cents. If you're drinking sarsaparilla, it's not because of the taste. It's because of a story, an atmosphere, a way of life--something that 7UP can't do. 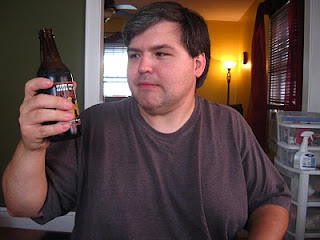 Hey there, cowboy. The rootin' was fine, but the tootin' could use a little work.
The verdict? It's root beer.
Posted by Crank Crank Revolution at 6:41 AM