Where My Dog Forges An Identifying Demographic

So I took my dog out this morning. Usually my morning ritual is not entirely clear, since I am taking him out in the first few minutes of my consciousness of the day and I am not entirely certain what is, in fact, going on. I shudder to think what the neighbors think.

But normally Dexter is pretty efficient when it comes to his morning constitutional, so I don't mind so much. This morning, however, he was in an exceptionally active mood, something that was not going to be tolerated by my lethargic ways. So I basically let him run around in our yard while I thought about sleeping some more.

All of a sudden, I see him chomping down on something. This is not too terribly unusual; he's eaten grass in our yard before. However, he kept chewing and chewing and chewing on it, like some fourth grader who was just given six chunks of Bubblicious and is going to make the most out of it while he can. I got spooked, because my dog has the tendency to search out and find the smallest morsel of anything he isn't supposed to ingest and devour it in a manner of nanoseconds. And he was chewing away like the Guinness Book of World Records was standing nearby with a stopwatch taking notes.

So I do what any good pet owner does and crammed my dirty not-quite-awake finger down in his mouth to fish around for whatever it was he was trying to eat. I saw nothing, and I assumed he swallowed it, meaning I didn't really need to worry about it for another four hours or so. But when I took my finger out, he started chewing again. Now I'm truly spooked, because I know there's nothing in his mouth, which leaves only a select few circumstances that could still be viable, most involving regurgitation, and none of which appealed to me at the moment. So in the finger went again. Nothing.

Finally, with the threat of sick dog twice in one week, I gently pry his mouth open to do a full-on federal inspection. I then discover that he only has a clump of grass in his mouth, but he has it strategically wedged between his teeth and his cheek.

That's right, my dog had a plug of chaw.

Apparently, there are things about my dog I was previously unaware. 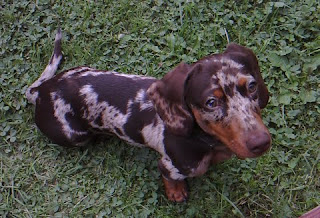 I humbly request a ham and cheese Hot Pocket for dinner tonight. Also, Sarah Palin would make a fine president.
I'm sure, like a good kraut, this was merely an "experimental" phase. We shall see.
Posted by Crank Crank Revolution at 11:12 AM