Bat Out Of Hell

When I wake up each morning to go to work , there is a rather long and comprehensive list of adjectives that do NOT describe me. "Chipper," for example, or " engaging." One of those adjectives--"perceptive"--was recently reinforced.

Last week I walked downstairs to go to work and I noticed something out of the corner of my eye. It was a bird, who had chosen to fly circles around our ceiling fan.

"Heavens to Betsy," I muttered out loud. "I wonder how that transpired." Either that or I screamed like a little girl. I don't recall.

My wife came down to see what all the commotion was about.

"I've dealt with bats before. This is NOT a bat."

I was certain of my opinion, but I was also late for work, so I chose not to argue. Flying Animal Removal 101 tells you to open up the doors and chase it out with a broom. We opened our front and back doors and, while one of us played linebacker with the cat so she doesn't escape and throw in with the wrong crowd out on the streets, the other tried to chase the bird-bat from room to room. At one point whatever it was brushed my shoulder and disappeared. Since I was busy flailing my arms around like C-3PO I didn't see what direction it went, but we waited for a bit and didn't see anything flying about. We closed the basement door just in case. The safe assumption was that the animal was gone and all was right with the world, a fact my wife confirmed as the day progressed with nary a sighting. Problem solved.

Until that night. Very late in the evening I went downstairs again just in time to see the animal back again, making laps around our ceiling fan. This time, I meant business.

I grabbed a broom and we chased it from room to room again. Finally the bird landed right near our basement door. Just like the photographs from the Cuban Missile Crisis, our worst fears were confirmed: this was, in fact, a bat. Worse than the fact that it was a bat, it also confirmed that I was wrong: 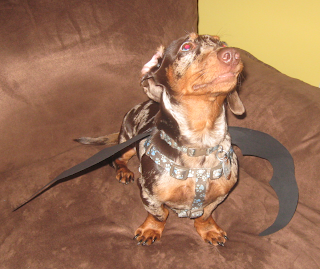 [REENACTMENT]
Obviously, we didn't take any pictures of the bat proper. We were too busy running around with random anti-bat objects to be able to lug our camera around.

The problem was that in the intervening time between the initial bat sighting and now, neither of us had bothered to learn Step 2 in Standard Bat Removal--it was all 1) Open Door; 2) Hope. That wasn't going to work in this case. We more or less had him cornered, so we had to review some new options. Option 1 was Cover Bat With Bucket Then Slide A Piece Of Cardboard Underneath It And Take It Outside. I'm not sure if this plan was tried first because it sounded halfway reasonable, or if it was because the nearest bucket-shaped thing was a Halloween candy bowl. 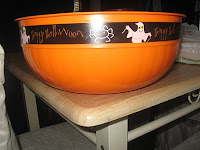 Warning: This bowl does a poor job of catching bats, spiders, and ghosts; however, it does an excellent job of catching Almond Joys.
Unfortunately, even a rudimentary level of physics was required to realize that this would never work; mainly, because the size of the bowl exceeded the space the bat was in. So we look around hurriedly to find out what to do next.
"Try wasp spray," suggested my wife.
Now, I am sure that there is some violation of the law of using wasp spray for its unintended usage, but considering Options 3 and 4 were looking more and more like smacking a frying pan on our wall and burning garlic on the stove,  I decided to give it a try.
I took the wasp spray and aimed. With a shower of nasty wasp poison, I hit the bat square in its blind eyes. My hope would be that after two seconds he would be dead. Obviously that didn't happen, since that doesn't even happen with wasps,and the bat immediately flew down our basement stairs and roosted to another part of the wall. I sprayed again, and the bat dropped to the floor like a rock. 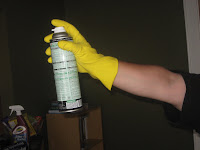 "Now I am become Death, the destroyer of worlds." --Jerry Van Dyke

I held up my fingers in a V salute, Nixon-style, proud of my victory. I go to examine the battlefield while my wife starts playing "We Are The Champions" on Guitar Hero, only to stop short in horror.
The bat was gone.
I hadn't won after all--apparently, after falling to the floor, the bat went...Somewhere Else. This is the worst feeling of all, because now at this point the bat could be flying around again or crawling in a rafter in our basement to hide until morning or--worse--die a slow and nose-assaulting death.
So we close the basement door and more or less seal everything up tight. My wife started looking up bat removal strategies while I rested up for what was certain to be an exciting but exhausting morning of bat-hunting.
Apparently, while I was asleep my wife went to the world's worst web site for bat removal advice. Because when I woke up her solution was:
1. Sneak up on bat
2. Take a washcloth and GRAB ON TO THE BAT.
3. Talk nice to it because it is scared.
4. Carry it outside and release it, like the dove it desperately wants to be but never will.
For the purposes of thoroughness, let me repeat step 2: Take a washcloth and GRAB ON TO THE BAT.
I'm not sure where she got this information--I can only assume it was the Edward Cullen Center for Rabies Appreciation--but at the time it was the only idea we had. (The frying pan was looking pretty good by this point, though.) So off to the store I went to suit up--rubber gloves, broom, washcloth, and dustpan: 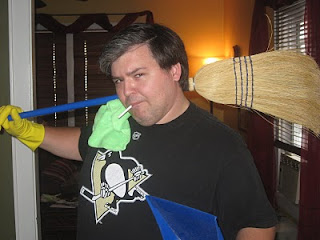 Not pictured: Dignity.
Our best sources of intelligence are that the bat is in the basement. So I slowly venture on down to the basement, where the confrontation of the century is about to take place. I am more or less fed up--anyone who tells you that they are sleeping soundly when there is an 80% chance that a bat is in your house is a straight-up liar--and want this over with. Besides, I have a cat and a dog to worry about. And a wife. 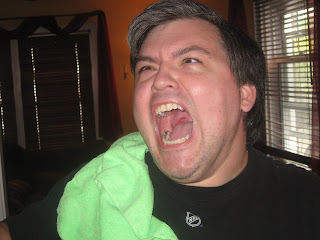 Hope you are all koshered up, because it's time for your BAT MITZVAH!!!
In the basement, I find--nothing.
It was a harrowing experience. Every shadow, every bit of unfamiliar pipe valve or wire or renegade dryer lint all become vaguely bat-like in their attributes.  You know in horror movies where the protagonists make these improbable movements and about-faces and cliches every time a twig snaps--well, that was me. I was the last guy in the troop line in a Vietnam movie. I was the lawyer in Jurassic Park. As far as I was concerned that bat held a constant position 180 degrees behind my eyes, just waiting for the chance to lay eggs in my hair.
It didn't help that it was sweltering--I mean, pants-seat-soaking hot. And for some reason I am more or less duck-walking, moving around in a permanent crouch because it is clear that being an entire two inches shorter than normal is going to save me from ending up like Officer Kane from Alien. Also, the kitchen gloves are making my entire body smell like rubber. So I eventually emerge from the basement, soaking wet and sticky with rubbery sweat, my leg muscles cramped in pain, and my brain psychologically reeling from spending forty-five minutes right on the verge of being attacked by a flying rat. 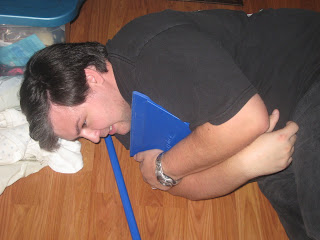 I DON'T LIKE THIS SHOW PLEASE CHANGE THE CHANNEL
As a last-ditch effort, my wife convinces me to go shop for a "bat trap," something I am certain does not exist. A call to about four hardware and farm supply stores confirms this--there is no mass-market product that can be used to capture bats unless the bat is shaped like, and acts like, a rabbit. One helpful individual, however, did tell us to put rotten fruit in a garbage can, and then slam the lid on the can and take him out. However, this would require extensive waiting by a garbage can in my basement on my part, something I am not willing to do, so we come up with an even awesomer solution: put rotten fruit on glue traps, so we don't have to be there when the inevitable capture occurs. The only drawback is that we can't let the cat in the basement, since she WILL somehow find a way to 1) feel the urge to eat rotten fruit, and 2) roll around in the glue like a two year old. 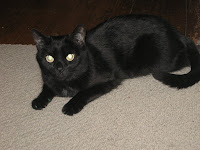 I AM NOT A CHILD!
So that's what we did. After four days--nothing. No guano, no bite marks on our necks, not even the Joker. So we threw the traps away and opened the basement back up, and so far there has been no sign of the bat. I had mowed the grass and had to leave the basement door open for a bit, so he may have escaped then. There are quite a few low-level chances for the bat to escape, so right now we are chalking Operation Get This Damn Bat Our Of My House a qualified success.
But if I start to glitter, call Van Helsing.
Posted by Crank Crank Revolution at 1:48 PM