Around a year ago, something surprising changed my life.

I was meandering through one of the aisles at Wal Mart and I happened to notice a new item on the shelf. That item, in its saintly white package, was nothing less than Coconut Flavored M&Ms. It's like I won the Nobel Peace Prize in Discovering Tasty Confections Everyone Else In The World Already Has Access To.

Anyway, I decided to gather a few of the newer flavors to see what they're like. Let's take a look. 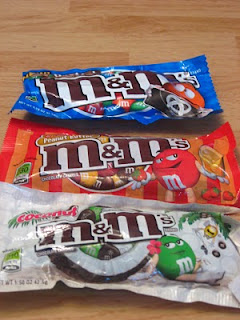 We have, from top to bottom, Pretzel M&Ms, Peanut Butter and Strawberry M&Ms, and Coconut M&Ms.

I don't know what it is about chocolate covered pretzels that people love--probably the mixture of salty, sweet, and crunchy.* Though I never quite got the allure of "crunch"--you can't taste it, but I suppose it's better than it having the texture of raw liver. 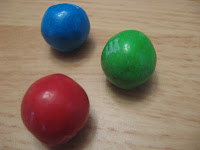 Now you're looking at this tasty treat but tasting raw liver. Welcome, pledges, to Rush Week!
The problem is, chocolate covered pretzels are something to be savored, my breakfastime gorging notwithstanding. Munching on these pretzel M&Ms doesn't let you do that--you more or less gobble them down like Cookie Monster at the Keebler Treehouse. So they taste pretty good, but it's not a very enjoyable experience. 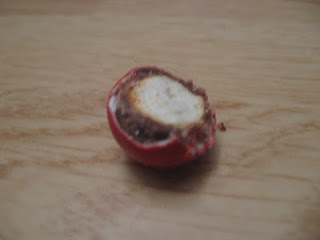 Apparently, even though this might taste like the solidified nectar of the heavens, if it doesn't feel like an acid-laced ride on the Matterhorn at Disney, it's worthless.
Next up:
Peanut Butter and Strawberry M&Ms
Unlike pretty much every other child on the planet, I was never one for peanut butter and jelly sandwiches.** I don't know why--I absolutely love peanut butter, and while jelly isn't my thing, I certainly don't hate it. Probably the OCD in me just wanted either a PB sandwich or a J sandwich, not some hybrid frankenstein combination of the two. That's just sick.
And if I don't much care for peanut butter and jelly, I most certainly don't like pre-made versions of the same, such as Oreos or ice cream flavors or any such thing.  Just ew. 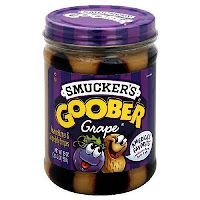 Get lost! You disgust me! And take your disgusting bastard cousin fluffernutter with you!
For some reason they have freckles, not unlike a tan Lindsay Lohan. 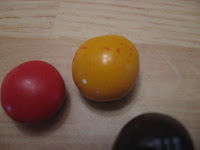 Now you're looking at this tasty treat but tasting raw liver. Welcome, pledges, to Rush Week!

Granted, the M&Ms are strawberry, and not proper concord grape, but the idea is the same--vaguely fruit-flavors gelatin-style stuff combined with sticky peanut butter just hain't my bag.

So I wasn't expecting much, and I didn't get much. They basically were peanut butter M&Ms with a very faint strawberry taste--there's not actual strawberry filling, just flavoring in the goober paste. 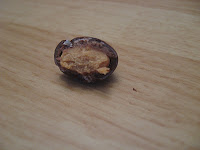 This is your childhood, covered in a thin layer of chocolate and sold for a buck quarter per dozen down at the Citgo Station.  Ah, memories.
And, finally...

Coconut M&Ms
So far, I've been quite surprised that these aren't getting the treatment that the normal line of flavors have. After my then-fiance/now-wife and I discovered them in the aisles of Wal Mart, I was quite distressed to realize that they were stamped with the dreaded words "Limited Edition." That is, just as I found something awesome, they were going to take it away and never bring it back again, lost in the memories of forever. Just like Pita Stuffs and Banana Pudding Pops.

There is a clear and present conspiracy afoot, because in two minutes of searching I could find no confirmable pictures of either Pita Stuffs or Banana Puddin' Pops on the entire freaking internet.
As a completely unrelated aside: why are there no chocolate banana M&Ms? Mars, I expect royalty checks in the mail anon.
A few months pass as the Limited Edition boxes slowly disappear and I quietly weep. Around Christmastime, I get curious and check the web site--it turns out that they were being added to the "regular lineup of flavors." Merry Christmas to ME! Unfortunately, this ultimately appears to mean that they will only show up in gas station candy aisles in those small trial size bags, because so far that's the only place I've been able to find them.
So, anyway, Coconut M&Ms were already determined to the best thing ever, because coconut is awesome. This candy doesn't disappoint--the taste is strong enough that it feels like you're immediately transported to a quiet tropical isle and your taste buds are assaulted with the marvelous taste as if someone poked a hole in a sweetened coconut, poured a pound of chocolate syrup in it, shoot it up, and jabbed a straw in it and handed it to you. But it's not so overpoweringly strong that it feel like Jimmy Buffet is rooting around in your jock strap looking for his roach clip while Che Guevara shoots dissidents in the back of the head in full view. 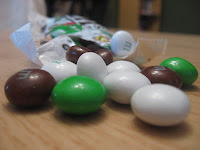 Welcome to Margaritaville. Viva la Revolucion!
The only disappointment is it's clear that it's just chocolate mixed with that nasty artificial coconut syrup they put in coffee drinks. It would have been better if actual bits of coconut were stuck between your teeth so you could enjoy this wondrous confection well after the bag was devoured, but I can certainly understand why they didn't do that--I assume cost reasons, but why those pantywaists over at the Almond Joy factory can do it and M&Ms can't I don't know. Still, it's pretty good, so I can't complain too much.
Verdict: Coconut is awesome, Pretzel is pretty good, and PB&S isn't my thing but other people who have had normal person childhoods may enjoy it.
*This also describes my wife.
**OK, to be fair, there is a long, long list of reasons why I was unlike every other child on the planet. Getting a subscription to National Review in junior high just being one of the infinite reasons.
Posted by Crank Crank Revolution at 6:51 AM