I was shopping at one of our local corner grocery stores when I happened across a display box of candy cigarettes. I haven't seen these things in ages, and I was also under the impression that they had been declared illegal, so of course I had an immediate desire to purchase the entire case. Illegal awesome stuff tends to have that effect on me.

They were only a quarter a pack, and already my day was getting brighter. However, there were many, many more boxes in the case than I estimated and the grand total was going to be something like nine dollars. Since this would exceed the Crank Crank Revolution Marketing Research Budget by some 900%, I opted just for a buck's worth of compressed sugar logs.

Of course, I thought these things were illegal, since the government determined the following facts about tobacco products:

1) They are bad for your health.
2) They are an equally good thing to tax.

Since candy cigarettes let you smoke without actually smoking it was determined that they would be a bad influence on children. However, since they couldn't be taxed since they didn't have any actual, you know, tobacco in them, they had to go. Thankfully, they're still legal and the republic saved, though this is the third time in as many decades they have come to within a pretend-puff away from being declared contraband. 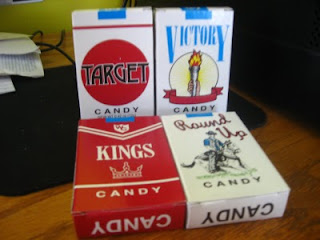 I don't know about you, but I want a real cigarette RIGHT NOW.
I have to admit: these look about as close to real cigarette packs as you can get without either violating trademarks or being forced to slap a WARNING: SMOKING = DEATH label on them. Granted, I don't think I've looked at a cigarette packet in about six decades, so as far as I know they are neon and have 3D cartoon strippers imploring you to smoke Lucky Strikes.

Anyway, these things were just the AWESOME back when I was a child. Nothing made you feel more grown up than when you stuck one of these bad boys in your mouth and pretended your way to ordering that hit on Johnny Three-Knuckles or pouring an old-fashioned at the office. 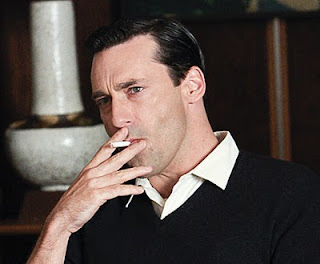 What do you want me to say? Oh, right, smoking kills, kids. Don't smoke.
For those who have never had candy cigarettes before, the offhand description I listed above pretty much does the trick: They are compressed sugar sticks. Of course, the company could hardly get away with just throwing a bunch of sugar in a container and selling it (though Coke somehow gets away with it), so they put the smallest dusting of red coloring on the end of it to show that it was being "smoked." 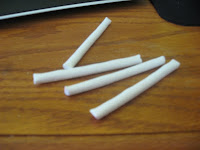 I don't know about you, but I want to put these in my mouth like a walrus RIGHT NOW.
Truth be told: the things are kind of nasty. They basically have no taste at all, and after about ten seconds all you do is chomp it away. They're just bland. I don't even think there's that much sugar in it: I think it's all glue, sawdust, and bleach with a hint of corn syrup. Of course, the point of candy cigarettes was never about the taste or satisfying a sweet tooth, it was always about looking cooooool without all the pesky lung cancer. 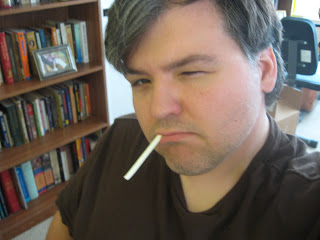 Hey there, candy cane. You want a ride to the state store in my van? I have to pick up some stuff at the Rent-A-Center on the way if you don't mind.
The verdict: Eh. They're kinda gross, but you know what? I've already eaten a box. You win this time, Big Tobacco!
Posted by Crank Crank Revolution at 7:27 PM