Trapped in the Attic

A few months ago I was taking some of my many, many important documents (read: board games) to my attic. We have a reasonably large attic, but, like most attics, it's kinda cramped and there's a lot of hunching and cranking, and getting to point A and point B is so complicated you'd think PennDOT organized it. In the midst of playing the world's sweatiest game of Tetris, I inadvertently backed into one of the light bulbs, quite literally ripping it out of its socket.

This picture of Angelina Jolie has nothing to do with what I'm writing, but it will keep the picture below from showing up on the previews. Trust me, this works in everyone's favor.
After checking that it was safe (cough, cough), I proceeded to make up new swear words to described my clumsiness. The attic isn't exactly well-lit to begin with, and this more or less enveloped half of the attic into perpetual darkness. It's a cosmetic issue, but it's still going to be a pain to fix. Hence, it has not been fixed. (My wife wisely chooses not to enter the attic except under extreme emergency, so the only person this is effecting is myself, at least for now.)

The other day I was taking yet another collection of boxes and bags (read: more board games) to the attic. While I was doing the exact same thing, I somehow managed to make the exact same mistake. This time, however, there was no light bulb to cushion the blow. (If it's hard to imagine how a glass bulb could cushion a blow, this gives you an idea of the sort of pain I endured the first time.) Of course, the only thing to greet my shoulder when I backed into the light is the jagged metal receptacle for the bulb. This was not, as they say, pleasant. 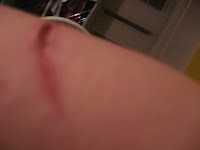 Spoiler alert: This hurt.
Thankfully, it was only a surface scratch. It looks awful but it doesn't bother me except for wearing seat belts.

Of course, the only solution is to fix the light, so that I have more light so I won't back into the light. I think.
Posted by Crank Crank Revolution at 10:23 PM