Following my previous review of 1960, we'll now take a look at an election much more recent: Campaign Manager 2008

. CM08 was designed by Christian Leonhard and Jason Matthews, the same folks as 1960. It is published by Z-Man Games and was released in 2009. 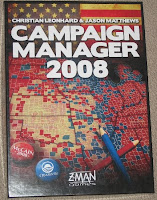 Now, there are obvious parallels between 1960 and this game. While the feel of the game is very reminiscent of 1960, the rules are quite different. A 1960 veteran would feel quite at home here, and a CM08 player could easily move to 1960, but the games are, at their core, quite different.

The goal of CM08 is to elect your candidate: either Barack Obama or John McCain. You are playing as a campaign manager, not the actual candidate, so the game play is based more on the unglamorous groundwork of politics rather than grand strategy or lofty, uplifting oratory. To win, both players will duke it out in 20 battleground states--the game assumes, quite rightly, that Obama is going to win Illinois and Massachusetts and McCain is a shoe-in for Texas and Arizona. The designers picked out those states that are perennial battleground states, such as Florida and Ohio, added the states that flipped since 2004--such as North Carolina and Indiana--and a few that were close, such as Montana and Missouri. They basically took any state that was even close to questionable and included it in the game.

There is no board in this game. The states are won one at a time, with four states available at any given time. Players win these states by playing cards from their hand. These cards are selected from a group of 45; each candidate has their own unique card set. Of those 45 cards, players choose 15 of them in a drafting phase. Each player draws three cards, chooses one, and discards the other two. The final 15 cards are what will be used for this game. This gives players control over the type of tactics they will use during the campaign, but also restricts them enough to make each game unique.

Let's take a look at a state: 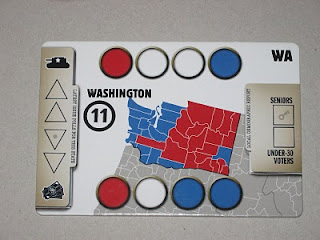 To win a state, a player must have all of the support (the large blue, white, and red circles) and have the issue (the triangles on the left) point towards the issue where you have the support. The states start out with a pre-determined setup--in this case, Obama starts off with two support in the economy (the bottom circles) while McCain has one, and the remaining one is undecided. By playing various cards from their hand, a player alters support, issues, and demographics (the squares on the right side). At any point if a player has more voters concerned about the issue they have all of the support in, they win that state. 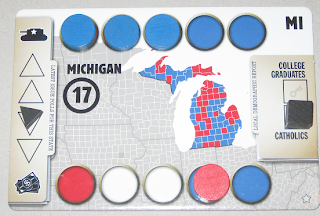 In this state, Obama has managed to get all of the support tokens on defense. However, since the issue is pointing towards the Economy, he hasn't won the state--but the moment the issue tips towards Economy, he wins this state. Of course, by that time McCain may have removed some of Obama's markers...

Once a state is won, the winner picks another state to contest. Then, a card representing a news item is drawn, with some sort of effect--such as the issue moving in a direction or the demographic changing. The effects of the card normally apply to the just-drawn state, but not always. 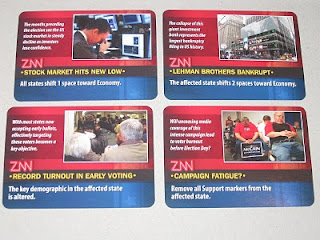 The demographic doesn't have any direct effect on who wins a state; however, many cards grant bonuses due to a specific demographic, so it's worthwhile to pay some attention to it.

Placing support, changing the issue, and changing the demographic are done simply by playing different cards. For example: 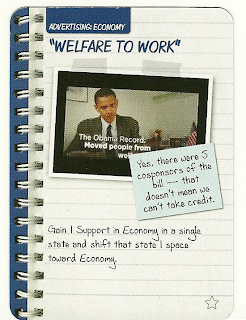 Each card has a title that reflects some event that actually occurred during the real-life campaign, along with text that identifies what you should do. The cards are fairly straightforward.

Game play is simple--players simply take turns playing one card or drawing one card. The instructions on the cards are easy to decipher, and there aren't a ton of rules beyond what has already been described. There's a "Negative Campaigning" penalty on some cards--they have pretty strong bonuses, but allow your opponent to roll a die and collect some sort of bonus for themselves. There are Media cards, which remain in play until your rival plays one; only one can be in play, so you must discard yours when that happens. But beyond that, the rules are not complicated at all.

The game is over once one player reaches 270 votes. Both players start the game with the uncontested states already awarded. (Obama starts off with an extra two votes due to the math; McCain starts off with more support in a few of the vote-rich states, so it more or less balances out.) There is a scoring track that allows you to place markers equivalent to their electoral vote, so it's easy to see when someone wins. (It's a little difficult to eyeball, so I use it as an approximation, and I do the arithmetic in my head when it gets close.) Games are pretty tight, so it's unlikely either player will win until nearly all of the states have been awarded.

What is good about this game:
*It's simple. There's a few tweaks in the rules here and there, but for the most part it's a matter of playing cards that place support, change issues, draws cards, or changes demographics.
*That said, it's not a shallow game. There is a significant amount of strategy involved. Choosing which states to concentrate on, deciding where to allocate your resources, and trying to outguess your opponent's actions all play a part.
*It's balanced. Whatever is available for the McCain player is also available to the Obama player. The news cards have the same event for both sides.
*Luck is minimized. Sure, your initial card draft may leave you with a card you don't want or you don't get a card you wish you did. However, there are enough cards in the deck that duplicate one another it's pretty rare. And an advantageous news items may hit your rival while you get hosed. You also run through your deck pretty quickly, so if you miss an opportunity you'll get it again fairly quick. These problems aren't common, and your rival is under the exact same restrictions.
*It's quick. The first few plays might take up to an hour, but once both players get a few games under their belt a session can be over in about a half hour.

What I don't like about the game:
*The deck is only 15 cards. I understand the reasoning for this, but it makes the game a little boring, especially since many of the cards are close duplicates of one another. I would have liked a 20 or 25 card deck out of a 60-75 card pool.
*Both sides are, for the most part, exactly the same. McCain gets a few Defense bonuses while Obama gets the equivalent bonuses for Economy. Aside from that, there are at most three cards that are different between the two. Effectively, it doesn't really matter whether you play as McCain or Obama, and I think that's a shame--they could have added a lot more flavor to the game without sacrificing a significant amount of simplicity.


This is a good game. It's simple and quick enough that you'll have fun; and the balance between complexity and brevity is done well. Personally, I expected a little bit more differentiation between the two candidates, but beyond that this is a solid game. I grade it a B.

, the epic battle of the Cold War.