While on vacation months ago, my wife and I came across an odd little selection from one of those little overpriced popcorn shops that have absolutely awesome flavors of popcorn and taste immaculately wonderful so you buy about six canisters of the stuff then once you bring it home and it's been smoldering in your car for the six hour ride home and you've already eaten about four pounds of the stuff in one sitting, you stash it away, uneaten, until it gets thrown out a year and a half later when you need to make room for all the stuff you bought to make Thanksgiving cookies that will never be made.

The item in question was a tiny box called JBz, made by the Jelly Belly corporation. 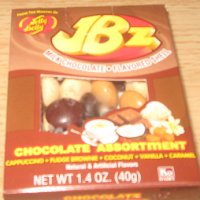 That title just screams "Totally Rad!" Um, I should probably check the expiration date on these.
Now, I've never been a fan of jellybeans--usually too sweet and the percentage of getting a licorice one too high--but Jelly Belly has always been a cut above the rest. The Cadillac and Black Label of jellybeans. I remember as a child going into a candy shop in Monroeville and picking and choosing from what seems like six hundred thousand flavors of Jelly Belly candies but was probably more like twenty. And they were so flavorful and--the best part--when we could we would mix two or more flavors together to make your own recipes, like banana, strawberry, chocolate, and pineapple to make a banana split. For those of us who society didn't trust with food processors or open ranges, this was as close as we were going to get to culinary creativity.
So, upon seeing these, I assumed that they were quality. Just look at that box: already I see four out of five awesome flavors. (Screw you, caramel. I've hated you since the second grade.) And that glorious little assortment that shows the graphical depiction of each of the flavors--for those who can't read and a picture of a brown jellybean would be inadequate--just makes me want to consume the actual box.

I just want to devour the portion of my monitor displaying this.
So how are they? Well, I'll get straight to the point--they're awesome. But--and this is important--they are not jellybeans. 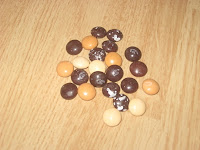 "Jelly Small Chocolate Round Thing That Is NOT An M&M" doesn't have the same flow.
I just kind of assume since they were Jelly Belly and it said "Flavored Shell" on the box this would be some weird candy-coated jellybean they cooked up at the Jelly Belly Institute For Unrepentant Awesomeness. But, in actuality, they are just M&Ms with different assorted flavors.
I'm not going to go through each one, since the result is pretty much what you would expect--they taste like coffee, coconut, brownies, vanilla, and poop. They are very strong and flavorful, and you almost don't want to just throw a bunch in your mouth like you would with M&Ms or regular jellybeans--they're strong enough that one at a time is perfectly acceptable. I swear, they won't make fun of you down at the Diogenes Club if you sip your wine and pop them in one by one. 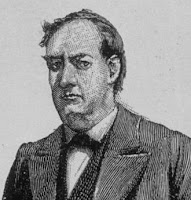 At least not for that.
The verdict? They seem to be hard to come by, but they can probably be found in drug stores and specialty candy shops, otherwise known as tourist traps. But they are definitely good and even if you are a communist and like caramel you'll find something you like in that little box.
Posted by Crank Crank Revolution at 6:49 AM