Yesterday, I had scheduled a day off of work for my birthday. My wife had generously proposed a trip to Fort Necessity, and so we made a day trip with myself, my wife, and Dexter.

The trip itself was wonderful--the facility itself is first-rate, and I recommend anyone who can to visit. (It is close by to Falling Water and not too far from the pending United 93 Memorial, so it would be easy to hit all three in a day if one were so inclined.)

After a long and winding trip down, you know it's going to be a good time when your initial contact with a historically designated battlefield greets you with this: 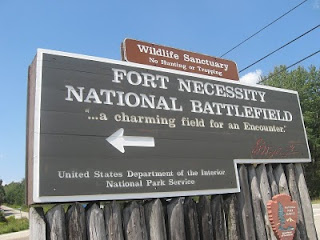 "Please, kind sir, may I have the privilege of shooting a half pound of grapeshot through your abdomen?"
I'm fascinated by the French and Indian War, not least because I live in a town that was a prominent battle site (though, due to the rampant demand for KFCs and stone and gravel pits, you wouldn't know it from driving through the place.)  My plan was always to more or less visit a large number of these forts in my lifetime, since most of them are pretty much surrounding the area that I live in, followed east towards Maryland and north to Canada. Alas, it seems that most of the prominent ones either have little to no actual things to visit or have developed into large cities and/or universities. 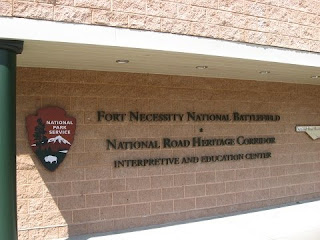 Once you go through the self-guided tour inside, where they have uniforms and weapons from each of the participants (for those who haven't figured it out: it was French and Indian allies versus the British, which, at the time, included one Mr. George Washington.) This was a small initial skirmish that more or less began the Revolution--the consequences of the entire conflict eventually led (albeit a few decades later) to the establishment of American Independence and the beginning of the destruction of the British Empire. 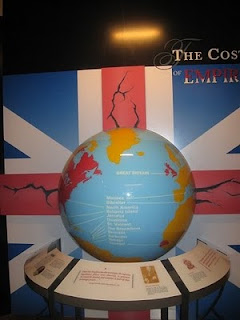 It's good to know our historical heritage is being represented by subtlety.
The site is also part of the National Road, one of the first colonial highways to connect the coast with the interior. It has been preserved by pouring blacktop and cement over it and rechristening it US-40, heavy  construction of which apparently is still continuing today. I'm sure if PennDOT existed in 1754 they would have worked on it every single year from then until today, and still somehow stuck the Brits with the bill.

Dexter, of course, had a blast. He couldn't get enough of using his snoot to root out those frogeaters and Injuns. 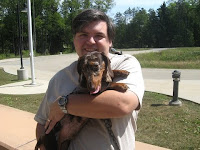 Where all the white women at?

Of course, my birthday wasn't just a recollection of our nation's history. My wife also got me some awesome birthday gifts: a new MP3 player, which I planned on purchasing myself here within a few weeks after my old one shit the bed; a Mario Bros. T-Shirt; and tickets to the first Pittsburgh Penguins pre-season game in the new Consol Energy Park against the hated Detroit Red Wings. All in all a pretty good birthday, not least of all because I spent it with my wife and my pets. 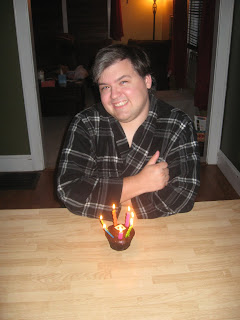 Also: cake
Posted by Crank Crank Revolution at 11:34 AM