Born in the USA

Tonight I went to one of my friend's birthday parties. Since it's around Halloween time, the theme of the party was 80's rocker theme. Me, being one of minimal effort and even less embarrassment, decided to go as The Boss, Bruce Springsteen. It more or less merely required a white T-shirt, bandana, American Flag hanging out of the pocket, and a keen vision of seeing the working middle class vanish under the unforgiving thumb of bankers and technological progress. Take off the bandana and it was an instant John Mellencamp, though I'd have to ride in on a threshing machine and cry big fat man-tears about family farms to make the image complete 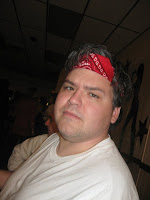 I have seen the future of Rock N' Roll, and it involves an open bar.
I figured--if nothing else--this costume would be awesome for like the first 20% of the party, then have a long, sliding decline in popularity.

[For the record, the mysteriously unknown Springsteen song Radio Nowhere is an awesome song and one of the few non-Irish drinking songs that makes me want to go out and set courthouses on fire.]

I was also going to wear a guitar, but since I don't own a guitar, I was going to bring my Guitar Hero guitar. Of course, I decided against it; I figured at a party like this, it would somehow manage to disappear, just like all of those manufacturing jobs under the Reagan Administration.

There were plenty of good costumes there, ranging from local favorite Brett Michaels  and Devo to Pat Benetar and Freddy Mercury. A lot of kids who were born in the 2000s were singing 80's songs which for some reason creeped me out even though there is no logical reason for this to be so--I'm pretty sure I was singing Over The Hills And Far Away at my 8th birthday party. Oddly, I didn't see anyone wearing a George Michael outfit, but then again I didn't check all of the bathroom stalls.

My wife was a trooper and dressed up as Toni Basil: 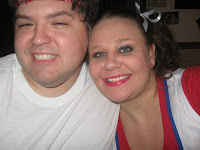 Apparently cheerleaders make me drowsy. Or high. Or creepy old man-ish.
She had pom poms and everything, a fact our cat was more than happy to find out. It was certainly a fun time, ad the party was still kicking when we left. That may not be such a good thing, especially for those who knows how Wall Street ends--tears and redemption, and not necessarily in that order.
Posted by Crank Crank Revolution at 12:18 AM