When a co-worker told me that one of their friends had seen Pumpkin Pie Pop Tarts at the store, I outright called her a liar. There was no way that humanity could have existed this long without the accumulated evolution of cultural science having created such a heavenly idea decades ago. But, sure enough, I was convinced that the thing existed once a picture of it was presented to me. As they say at the CIA when given documentation of weapons of mass destruction, "good enough for me." 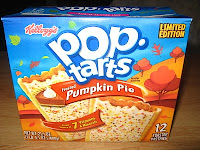 This is what hopes and dreams are manufactured from. Not pictured: unicorn souls.
Well, needless to say I went out that day to the local grocery store, only to be disappointed in the rather standard array of Pop Tart flavors: strawberry, cookies and cream, apple strudel, and so on, a sad list of those tired but dependable things that crop up when discussing prime time television, living room paint, or Pop Tarts. I managed to go to four different grocery stores and convenience shops over the course of the following day or so only to be disappointed again and again, like some awful repeating cycle of bad mojo and despair. 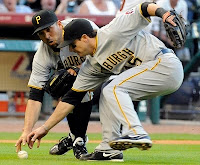 Don't worry. We haven't been able to find Pumpkin Pie Pop Tarts since 1992.
I have always had a love/hate relationship with Pop Tarts. On the one hand, marketing them as "breakfast" when they are clearly dessert is a straight up crime, and some of the flavors are too sweet as to be inedible. On the other hand, they are awesomely delicious. But I just can't shake the feeling that calling it a "Pop Tart" is misleading--that sounds less like something hearty for your morning meal and more like a derogatory term for some young inappropriately-dressed gyrating harlot with a top 40 dance hit.

Hey! That's a cheap shot. I'm not old enough to eat Pop Tarts.
The prospect of knowing that Pumpkin Pie Pop Tarts existed and that I couldn't have any was a dour one indeed, since I harbored a brief and fleeting notion that procuring such a thing would make an awesome anniversary present for my wife. I soon realized that this would be a markedly bad idea, and it was regretfully but rightfully abandoned.

I swear, honey, I'm not making it up! The Internet is never wrong.
Fortune turned my way, though, as one of my friends found it at another grocery store--unbeknownst to me, at the secret secret request of my wife. So I eagerly stood on the sidewalk as my supplier--I mean, friend--dropped off a 6-pack of Pumpkin Pie Pop Tarts. I popped that bad boy in the toaster over as soon as I got in the house. 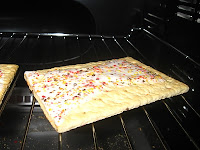 My Michelin rating just got bumped up a star.
After an excruciating wait for over 90 seconds, I carefully pulled it out of the toaster oven--earlier, I had let something in a touch too long so I was a bit gun-shy--and sat down to enjoy it. 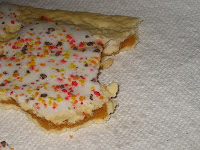 As you can see, it's a fairly standard-looking Pop Tart--too-sweet icing on the top, regular crust, normal filling. but wait--it's pumpkin in the inside of that, so it's not normal. It's delicious.
Basically, the thing tastes like what you would think a slice of pumpkin pie would taste like if there was like three times as much crust as normal and you slathered it with a hard sugar paste and slammed a textbook down on top of it. Personally, I would have preferred a little bit more pumpkin filling and I could do without the icing, but neither of those things are earth-shattering deal breakers. These things are awesome, and they taste a lot better than normal Pop Tarts do. Granted, if you're not a fan of pumpkin pie, you'll have no use for this thing. And it's not going to replace Grandma's Special Thanksgiving Pumpkin Pie with Cool Whip and a Hint of Nutmeg anytime soon. But it's surprisingly similar.
Of course, as with most things I review, these Pumpkin Pie Pop Tarts are stamped with the dreaded "Limited Edition" label, which of course means they will pull it off of the market once everyone starts to like them. Granted, if this ends up being a seasonal item that starts showing up in late September and runs until supplies last, I suppose that is to be expected. I just hope the thing comes back again. In the meantime, get them, as they say, while they're hot.
The verdict: About the best sort of Pop Tart flavor they could come up with until Coconut Cream comes out--it's this sort of thing Pop Tarts were designed for.
Posted by Crank Crank Revolution at 10:23 PM