A Conspiracy is Afoot

I do believe that my pets have formed an implicit conspiracy against my wife and I.

Last week, I attended a birthday/Halloween party for one of my friends, and my wife played the part of the girl who sang "Mickey" and whose name I have forgotten and am too lazy to look it up on Wikipedia. This, of course, necessitated a cheerleader outfit, complete with balls of yarn on her shoes and blue pom poms.

It's this last item that is the issue. Not only are they good for doing pretend cheers to a thirty-year-old song, but apparently they make excellent snack time for cats. Nora just couldn't get enough of chewing on these little strips of non-toxic plastic and then horking up little blue puddles of ick in inconvenient places around the house (read: anywhere in the house). 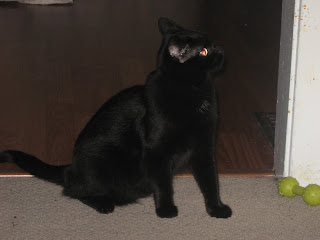 If anyone sees Gargamel around, just tell him I ran to the gym. Let me know when he's gone.

So my wife tied up the pom poms in a plastic bag and put them on our dresser.

Later that night, I hear a sound. It sounds like a plastic bag hitting the floor--and I immediately know that it's Nora trying to claw her way into that stupid bag of stupid pom poms. I get up from the computer and storm into the bedroom to see that 1) the bag is still on the dresser, and 2) Nora is not in the room. Considering the fact that I watched Paranormal Activity for the first time two days prior, I chalked it up to the fact that it was simply a supernatural being who wanted to get me off the computer so it could use the Internet to look for victims on craigslist then make me pee the bed later.I then promptly forgot about it.

About an hour later, I go downstairs to get a drink and I see the results of the sound: a certain kitty has somehow managed to knock down a bag of Dexter's treats (Oscar's Gourmet treats, to be exact) from our bookcase and all of the treats in the now-open bag were everywhere on the floor. I got down on my hands and knees and picked up as many as I could.

The next morning, my wife lets the dog out. Now, normally, Dexter is not a morning dog; when I wake him, he refuses to move or react or do anything except let me drag him out on his leash to go outside, fully playing the part of the recalcitrant surly teenager. Today, however, once the door to his crate was cracked open he made a straight shot to the bookcase and stuck his snoot under every piece of furniture, lapping up each treat that I didn't find the previous night with his tongue . 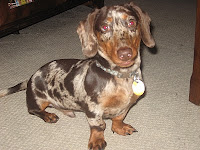 This is the combined equivalent of H.R. Haldeman, D.B. Cooper, and Bernie Madoff of the house
Now, I can't speak for my pets (then again, neither can they, though Dexter certainly tries) but I am firmly convinced this was a clear elaborate setup from the beginning. 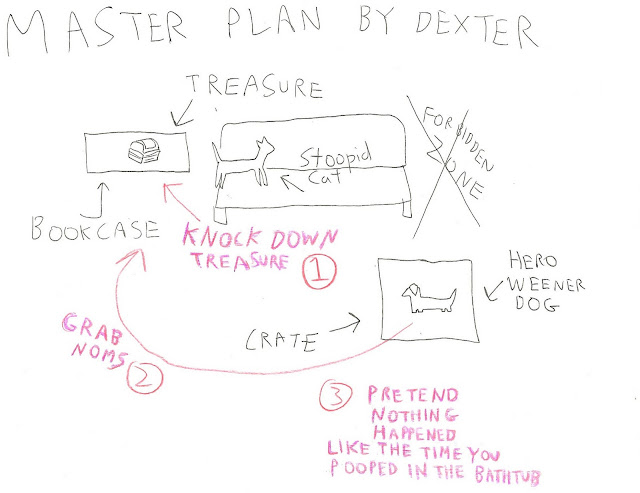 This isn't the first time they have engaged in such shenanigans. If I don't keep an eye on them, they're going to take over the house. Soon enough, it will be time to crate them up and send them off to the Boarding School For Wayward Wiener Dogs And Cranky Cats.
Posted by Crank Crank Revolution at 10:45 PM