I just came back from the Crazy Scary event at the Pittsburgh ScareHouse. This was for charity, with the number of tickets sold determining whether Virginia Montanez from That's Church would walk through the haunt alone or if BurghBaby's Michelle would dress up like an awesome little princess. (Good sports all around, both ended up doing their forfeit. It's for the kids.) Here's a picture for those keeping score at home.

Regardless of the event, it was a pretty good time, and I recommend it. 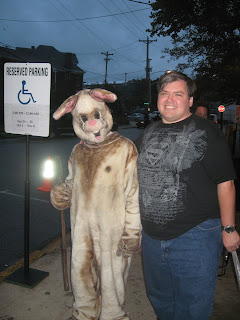 The Adventures of Puffy Emo Superman and Greasy Donnie Darko would make an awesome TV show. Prove me wrong.
Going through the ScareHouse itself, I have to say it's very well done and there's a reason it's regularly considered one of the top haunts in the nation. However, there's a certain feeling that comes over me when it's over, because I know that no matter how hard I'd try, I would never be able to accomplish anything matching it.

Why? Because if I were to design a haunt, thesewould be the main attractions:

1. First, visitors will walk into a field where there will be a recreation of the upcoming Superbowl XLV, and the only thing the Steelers need to win is for Jeff Reed to kick a field goal.
2. Likewise, visitors then enter a bathroom with only an empty stall and a drunken Ben Roethlisberger. Helmet optional. If anything happens, the only witness to back you up are Mel Gibson and Charlie Sheen.
3. Visitors also are herded into a room were the entire text of the health care bill is being read. Coincidentally, this is also the first time anyone will have read it.
4. At various points visitors will be asked by Lindsay Lohan or Paris Hilton to "hold my purse for a while, just until we get through the next few rooms."
5. There Will Be Horses. Enough to give you nightmares. Like one.
6. Occasionally visitors will be checked from behind by Gary Roberts.
7. Zombie President Nixon might just make an appearance.
8. Visitors are taken to a futuristic 2012, where the world has not ended; however, Donald Trump is president, schoolchildren submit all their homework on Twitter, and Fred Phelps is still alive.
9. Frankenstein will be there, which is mostly the broken leftover parts of Madonna duct taped together with the charred shrunken husks of Andy Warhol and C-3PO.  In other words, Lady Gaga will be there.
10. Pirates season tickets will be handed out as visitors leave the trail.


Needless so say, I doubt I have the resources enough to pull this off. Though Zombie Nixon tells me he has a cunning plan, and all he needs is my brain. I'm not falling for that one again.
Posted by Crank Crank Revolution at 11:14 PM