Time To Take Some Shots

Well, probation is over. The Steelers are now 3-1, and Ben Roethlisberger is now permitted to talk to the Steelers organization once again. He gets a bye week to recuperate and then will be back in the game in two weeks to play against the Cleveland Browns. 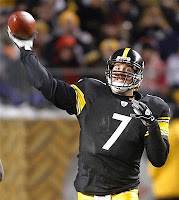 I'll be honest--I have no idea what I think about Ben's situation. I had a blog post half-ready in case of victory today that more or less said "We are 4-0 and we don't need you poking your pecker around here anymore. Have fun in Tampa Bay or Seattle or Glendale." The fact that the Steelers lost to Baltimore shouldn't fundamentally change my position, of course, but I didn't post it.

I began being leery of Roethlisberger during the aftermath of his 2006 motorcycle crash. For the most part, he seemed genuinely repentant about the ordeal, and he seemed to at least make an effort to apologize to fans. But then he refused to do a pro-helmet spot. Now, that's his choice, and I'm no supporter of helmet laws, but the least he could do was that, especially given the fact that he promised to wear a helmet from then on. He more or less said "I'm not going to do it, and if anyone doesn't like it, they can think of me what they want; I don't care." I think the incident was a legitimate accident, and while Roethlisbergershould should shoulder some of the responsibility, there's only so much one can do. And I respect the fact that it's entirely possible he was being guilted into cutting the ad and he resented it. So I gave him a pass; for pro sports players, this is hardly a blip on the radar.

I even extended him the benefit of the doubt for the Lake Tahoe incident, because I felt (and generally still do) that it was a setup. I know there are a lot of sports figures who truly act like assholes, and I also know that that makes it easier to be prime targets for extortion and blackmail.

As far as the Georgia incident is concerned, I'm not sure what to make of it. I won't go through all of the details here--those who want to know already do, and those who don't can easily find the information online. The cynic in me just wants Roethlisberger to go away; he acted like an asshole, put himself in a position where he gets himself in trouble, and his attitude throughout the motorcycle crash, Lake Tahoe, and this has been nothing if not irresponsible. I have no use for frat boys who never grow up, and no amount of Superbowl rings will make you look like a gentleman.

That said, he was never charged with a crime. And this I have a problem with. If there was no evidence of a crime, then he should not have been punished. If there was, then he should have been charged and at that point would be largely out of the hands of the NFL until it was all said and done. Instead, the NFL commissioner suspended him for a crime there wasn't enough evidence to prove.

I'm not naive--the most likely scenario is that something happened, but Roethlisberger's people--whoever that may be--put enough pressure and/or money into the cops, district attorneys, and media in Georgia that nothing came of it except for embarrassment. This, of course, is a travesty, since that is not how the justice system works. I know it happens in every avenue of life, but that doesn't mean we shouldn't recognize it when it happens.

And, of course, there is how the remainder of the league behaves. There are members of other NFL teams that have done much, much worse--you know, like vehicular manslaughter and murder--and are still playing in this league. While "everyone else is doing it" is not an excuse or a basis for judgment, it is also a reality. It doesn't make me happy, but if Ray Lewis and Dante Stallworth can play, why can't Ben?

I guess my main problem is that when I read the details of the case, I see a general probabilty that Roethlisberger is guilty, but I see enough gray areas that no lawyer would call it a slam dunk. And given the nature of the evidence and testimony it seems hard to reconstruct a valid tale from either Ben's or the victim's side. Given that, I still have to operate under the assumption that some of the details of the case have been (shall we say) altered given the stature of the accused, making any assumptions built off of the evidence a moot point.

And so that's where I stand, I suppose--astride two unappealing choices. Either I dislike Ben because he used money and influence to get out of a career-ending jam, or I cynically cast a jaundiced eye on our justice system and rationalize away his innocence. Either way, it's harder to feel all that good about a team you support under the circumstances. For now, I think, the ball is in Roethlisberger's court--if he stays out of trouble and does penance for the rest of his tenure as a Pittsburgh Steeler, he may re-earn some respect.