My people are free!

The government of Latvia appears to have been re-elected with approximately 55% of the vote; Prime Minister Valdis Dombrovskis will remain as head of the government for now.

Had I known about my impending adopted country's election, or had paid any attention at all to their internal news or current events, I would have mounted a massive get out the vote program. Maybe next time. 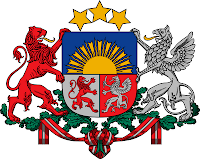