The last game in my board game review series is the latest one released, Founding Fathers

. Like Campaign Manager 2008 and 1960: The Making of the President, this was designed by Christian Leonhard and Jason Matthews. It was released in the summer of 2010 and is produced by Jolly Roger Games. Unlike the other games in the series (the two listed above and Twilight Struggle), this one actually requires multiple players--it plays with 3 to 5 people. 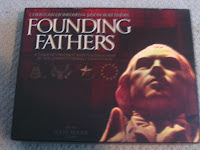 Founding Fathers (FF) is a simulation of the drafting of the Constitution. Each player takes the role of a Planner--well-known names like Alexander Hamilton and more obscure ones like William Paterson. While players can choose different planners, there isn't really a difference between them beyond their home state. Players will use delegates and influence markers to enact the plan they want and get as much credit for the framing of the Constitution as they can.

The board is an abstracted version of the convention hall. There is the Assembly Room, where most of the action takes place; this is where different articles of the constitution are voted either up or down. There is a debate track, where different planners can hold debates about different issues. And there is a Committee Room, which more or less acts like a loser's room. The board also has different sections for different markers. 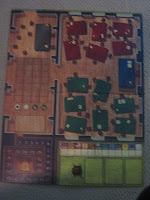 Each player can hold a hand of up to three delegates. Each delegate has a home state, a faction bias, and a special ability. On your turn you may do one of four things: vote on the current article, hold a debate, discard cards from your hand to draw new ones, and use a card's special ability. A player then chooses from the current pool of delegates to fill their hand. (A player can only choose from a selected pool of delegates, called the caucus, but the state is the only information listed on the back of each card. That way, each player knows what state they are selecting but not the faction bias or special ability.) Once a player has filled their hand, the caucus itself is also filled up to three. If a planner card comes up, it automatically goes to its owner--so if Hamilton is drawn, it goes straight to the player who is playing as Hamilton even if it's not their turn. 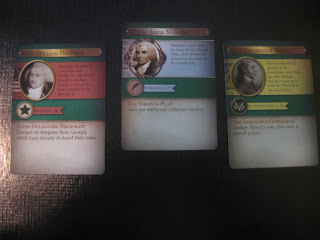 An example of three delegate cards. James Madison, in the middle, is a Planner.

At the beginning of the game, four of the twelve articles are automatically decided. Each article is either for or against two different biases: Small State vs. Large State and Federalist vs. Anti-Federalist. There are four turns in a game, so each turn two articles are resolved. Each article is going to be part of the Constitution no matter what players do; basically, each player is simply trying to flip the faction bias in their favor.

Most of the game will involve players voting for or against the proposed article. Players can do this simply by placing any number of delegates (and an Influence marker) from the same state (even just one) and placing it on either "yes" or "no." There are two main restrictions: first, a delegate cannot vote against their bias. So a Federalist delegate can't vote against a Federalist article. They can only vote for it; however, they are free to vote either direction on a small vs. large state issue. Secondly, you can't place delegates from a state if that state has already voted unless you put down more delegates than are already there. So if there are two delegates from Virginia voting Nay, you must place at least three Virginia delegates down to override it to change that state's vote to Yea. If a majority of the states vote one way or the other, it is immediately resolved and the turn is over.

If players aren't voting on the article, they can try and improve their positioning on the debate. A player may discard any number of delegates with the same faction bias--regardless of state--and move their marker up that many on the debate track for that bias. At the end of the turn, the player with the highest value in each debate track gets a token for that bias; this grants a bonus at the end of the game.

Each delegate has an event associated with it. These vary wildly, from simple victory point bonuses to game-changing alterations in the rules, such as holding extra cards or preventing other events.

Finally, if you just don't have any good options, you can discard your cards to pick up new ones. 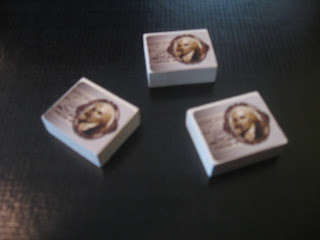 When the votes are cast, each player gains one point for each delegate that has an influence marker on it that voted on the winning side. Delegates with an appropriate bias faction get an extra point. So if you have two Delaware delegates voting Nay on a Large State article and you have an Influence marker on that delegation, you get two points from that state. If either (or both) of those delegates have a Small State bias, they get an extra point for each. However, if you've moved your Influence marker away to do something else, you get no points from that state! (Even though you don't score, the votes still count.) You score for each state you have an Influence marker on.

Any influence markers on delegations that failed go straight to the Committee Room.

After both articles are resolved, players get their debate tokens (as described above).

Two articles get resolved each turn: one in the Assembly Room and one in the Committee Room. After four rounds, all articles have been decided (eight for the four rounds, plus the four automatically resolved at the beginning of the game). The game ends. Players get a bonus based off of the debate track tokens they have collected as compared to the number of articles in the finished Constitution with that bias. The player with the most points wins.

Once players are familiar with the game, a four-player game takes perhaps an hour, maybe a little longer if the votes go back and forth a lot.

What I like about the game:
*It's fun! It's also very fast-paced. While there isn't much to do on a rival's turn, turns move pretty quick.
*The presentation of the game is wonderful. While the components look exactly as they should, all colonial and stuff, the instructions and each card is filled with real-life historical information. Not necessary, but it makes the game much more enjoyable.
*It is very well balanced, at least in the sense of what a player can do in a turn. While the voting in the Assembly Room is always going to be the most important, you never want to neglect the Debate Track, and you never want to pass up the opportunity to play a good event. You have to have your eyes on all parts of the board to play properly.
*While the Influence Marker mechanic seems clumsy at first, it also does a good job of forcing players to make hard decisions about what they are willing to sacrifice. It ends up being quite intuitive. While I wish there was a better way to gain markers--right now it's more or less random--it's not so bad as to be a huge issue.
*While the wide variety in the quality of events seems like it would be unbalancing, I don't really find that to be the case. Since most delegates are going to be spend on voting and debating anyway, you only play a select number of cards for events. Even then, no card is useless, so if you don't have may good options you can always do something.

What I don't like about the game:
*After playing the other three games in this series and their absolutely comprehensive theme-related gameplay, FF seems oddly mechanical. Despite the fact that the board presentation and cards have plenty of historical flavor and real-life biographies, I still feel like I'm simply trying to maximize points. I'm not sure why this is.
*For a game about voting, there's very little deal-making. No one can really offer another player anything beyond promises to vote, but there isn't much incentive to do so.
*Some parts of the game seem oddly unsatisfying. It seems like the Committee Room could have been infused with an additional layer of strategic decision-making, but instead is more or less automatically determined.  I know there is a certain level of complexity that must be sacrificed, but it just seems like a game like this could have used it.
*One delegate--George Washington--is pretty rough. His special ability effectively ends the turn immediately. While there are a few cards to counter it and it's not without its drawbacks, it still feels like it gives a huge advantage to the player who draws him. This card probably needs to be reworked.
*For all of the emphasis on faction bias in the game, it has very little impact on a player's final score. Aside from the debate tokens, whether an article ends up being Federalist or Anti-Federalist doesn't matter; it just matters that you're on the winning side. And even the debate tokens aren't all that important; the difference between the first-place and last-place bias is three points. While many games are close and those three points might be crucial, it still seems like a lot of work for little benefit.

The drawbacks to the game, however, are dryly mechanical enough that they don't detract this from being a good game. I find this to be the weakest game of the series, but that doesn't mean it's a bad game. In fact, I think this is probably the best game to purchase first. It has more depth than CM08. I would peg it to be about equal in complexity as 1960, but slightly easier to play; unlike 1960, you don't really need to know all of the special abilities to play a good game. My grade: B-.

I'll compare and contrast the four games in this series in a later post.
Posted by Crank Crank Revolution at 6:38 AM