As mentioned in one of my previous candy reviews, the major confection companies like to take an existing candy bar, add a new twist to it, and sell it as a new variation. This is a tried and true formula; an unknown candy bar has little chance of breaking the checkout lane impulse shelf, but a white chocolate Kit Kat or a coffee-flavored Snickers bar at least gets people's attention.

And so it is with Hershey's Thingamajig, a reversal of the existing classic Whatchamacallit. 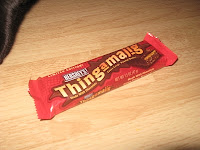 The cat who insisted on getting in my way is not included.
What makes the Thingamajig different than most variations is that it is more or less a reversal of its father. While the original Whatchamacallit has peanut crisp and caramel, the Thingamajig has chocolate crisp and peanut butter. Both are covered in chocolate.
To do a proper review, I wanted to get both a Whatchamacallit and a Thingamajig and do a compare and contrast. Alas, when I showed up at the store, the only Whatchamacallits available were king size. 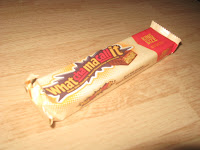 King size candy bars are why the terrorists hate us. But they shouldn't because polls indicate that terrorists prefer caramel over nougat 5 to 1. Hearts and minds, people.
So to make this all scientific and stuff, I was forced to buy two Thingamajigs to compensate. 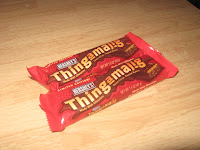 You know, for science.
I may be a bit biased, because as long-time readers know, I would marry peanut butter if I were legally allowed to while caramel is the man-sauce of the devil. Whatchamacallits aren't so bad--the caramel is actually pretty light--but when you add cocoa crisps to peanut butter, it's going to be hard to beat. 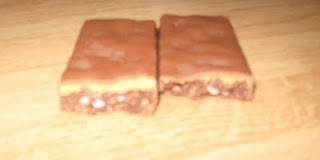 Not since the riches of King Solomon's mines have I seen such a wondrous delight.
My decision: Thingamajigs may not be my default candy bar of choice, but it's very, very close. It's commonly available at department stores, so it should be cheap and easy to find. If you are a peanut butter fan it would be worth it to give it a try.
Posted by Crank Crank Revolution at 12:52 PM