The Downfall of Western Civilization, Part 1

A few weeks ago I was walking through Target and I noticed this: 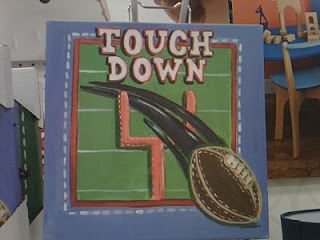 It's supposed to be a small picture to hang, presumably in a young boy's bedroom.

However, I find that there is a major problem with this. It's wholly inaccurate. The picture suggests that a  "Touchdown" was just accomplished.

The more important part, though, is that the picture is not a touchdown. It's either a field goal or an extra point, which is technically known as a PAT--point after touchdown. The former, of course, is outrageously wrong. Even someone talented in semantics might claim that the extra point is, indeed part of the touchdown. I believe that it is incorrect--it's the point after touchdown, after all, and two-point conversions are rarely considered touchdowns. Even then, it's clear in any level of football that the touchdown--the most important and exciting part of the game, the sort of thing people make small pictures of to use as decorations--is not what is depicted on this item.

In any case, this could potentially cause our youngsters to be confused by the rules of football. They will doubt that anything they have been told in their childhood is true, given the fact that someone went through the trouble of painting the depiction of a football going through the uprights, realizing that having a sign that says "Your Team Couldn't Make It More Than Halfway Down The Field So They Have To Settle For Three Points With A Field Goal" is kind of lame, and just slapped "Touchdown!" instead and hoped that no one noticed while they cashed checks at the bank. This could easily lead to a decrease in confidence in our democracy and erode the social mores that have developed for centuries. A congressional investigation committee is warranted in this case, I think.
Posted by Crank Crank Revolution at 12:00 PM