Just a short post today due to the Pittsburgh Steelers being on MONDAY NIGHT FOOTBALL. All together now: BAWB BAWB BAWB BAWWWWWB. Duh DUN. Duh DUN. 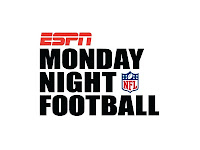 Okay, so it's no Hockey Night in Canada. But at least more than twenty people will be watching.
So on a related note: I really, really hate sports talk radio.

Not to single out radio--I hate most of sports media, especially for football. The actual reporting itself I could give or take most of the time--there is legitimate news, after all, that must be reported. I think a lot of the content of sports news, however, is unnecessary; many reporters will harp on the tiniest details all. week. long.

For example, last week, the Steelers lost to the New Orleans Saints. For a week now I've had to hear the comment "They said the Saints wouldn't lost two games in a row, so they were going to win" as if that explained everything. There's some super secret formula that the coaches have discovered where once they lost a game they won't lose another. Just like those ridiculous stats they splash all over the screen: Tony Romo is good on Thursday night games at home in December when the opponent is in the AFC West. WOW! With a sample size as large as two, how could that not be important? And already I've heard that 1) The Bengals can't lose because they are itching for a fight against their division rivals and T.O. and Ochocinco love prime time and that 2) the Bengals are already writing off the season because they are already 2 and 5 and so T.O. and Ochocinco are trying to avoid injury and won't be playing their best. Maybe the sports guys have been hanging around the weather guys too long.

It's almost like there is some sort of demand for talking about sports, but no one really has the material to fill it up. I can understand a little bit at the beginning of the season, when the dirty details of depth and new players and the secondary actually make sense even if it's very detailed. but at the halfway mark of the season, do we really have to analyze the performance of the third-string corner drafted 217th overall from Topeka Community College?

And, of course, I have no use for call-in shows. If there's anyone who knows less about more than sports media personalities, it's fans. They're all homers, looking for the best in their favored team while willfully dismissing the opposing team.

Not all personalities are worthless, of course. There are several--especially local guys that get to cover all of the home sports franchises in a city and don't have time to grant airtime to minutia--who get it. Unfortunately, the good ones are far and few between.
Posted by Crank Crank Revolution at 8:10 PM