For those who are dead and haven't paid any attention for the past what seems like fourteen years, today is election day. It's a mid-term election, where we vote for congressmen and about a third of our Senators, in addition to most governors and state legislatures. 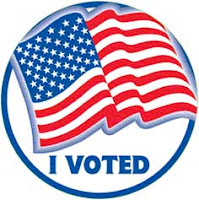 I encourage you to get out to vote. More importantly, however, I encourage you to be knowledgeable of the issues and candidates. Here's the tough love part, though: If you don't know enough about either, stay home.

I suppose I should be a democracy advocate, but I'm also part economist. Economics states that voting is fairly wasteful--the amount of time and effort you put into researching voting is not worth the negligible impact you'll have at the polls. Of course, I've always found this argument to be specious. A lot of people enjoy the act of voting, if for no other reason than they fulfill a civic duty, and this is a fairly powerful (and, to me, legitimate) incentive. If nothing else, there is a certain charm to the thought that all voters in our country are gathering together and doing what a lot of individuals in the world cannot all on the same day.*

However, I also spent four years as an election inspector--you know, the old ladies that sit at the voting table and hand you your ballot or card and make sure your out-of-date driver's license looks like you and offers you a nut roll after you've pulled your lever. I was one of those ladies. And while it's an interesting experience and I'm glad I did it and encourage other people to do it as well, it also made me a bit apprehensive. The proportion of voters who walk in and the first time they have ever looked at the candidates is when they enter the election station is alarmingly large. They are effectively voting randomly, or at the very least solely by party.  Party voting is fine--I, myself, find it a touch lazy, but I understand those whose circumference of issue preference isn't going to fall very often on the opposite side, so I don't condemn it too much. However, when it comes to voting for state and local elections, where the impact may in fact be far greater to your day-to-day life and the party line sufficiently diffused as to be meaningless, it pays to educate yourself first.

My impression as a voting inspector made me feel as though my vote was worth much less than it should, because if a significant percentage of the voters are voting because the last name of a candidate sounds like a guy they had a crush on in middle school, then why bother? The only thing that kept me from throwing my hands up on the whole ordeal is that there is a more or less same percentage that's going to fall on both sides, so all of those randomly selected votes cancel each other out.


Don't get me wrong--I want everyone to vote. But I also want everyone to be educated enough about the issues and candidates before they vote. I don't want to discourage anyone from voting, but I would rather encourage people to do the math, as it were. And this is probably an elitist thing to say, but I would rather have 60% turnout of moderately informed voters than 95% disinterested voters. This is why when people consider it a shame that not everyone votes I don't mind so much--if 30-40% of the electorate isn't interested in voting in the first place, their seemingly random voting patterns are going to counter each other and the end result is the same anyway.--if nothing else, it makes the process more random and unfair.

And, of course, there is that libertarian dynamic in me--what business is it of mine how people choose to vote? If someone feels that it's the best thing for America if all of the candidates are chosen by alphabetical order, well, if enough people think that, then that's what is best for America.

The Pledge: Voting is one of the fundamental building blocks of our country--our democracy is just as flawed as how we vote.
Posted by Crank Crank Revolution at 3:04 PM