In Defense of Keith Olbermann

I'm no fan of Keith Olbermann--chalk me up as one who thinks he's a bit of an unrepentant prick--but part of me is thinking he's getting a raw deal out of MSNBC. He's currently being suspended for contributing monetarily to various candidates running for office this past election; NBC policy states that no journalist is permitted to contribute for a candidate for fear of violating the appearance of bias.


While I guess the policy is OK--at this point, it wouldn't surprise me to see journalists politically active, but if they want to keep the thin film of appearance up, more power to them--I also don't think Keith Olbermann has been a journalist for a long, long time. He's been a pundit for as long as I can remember; he's in the exact same profession as Bill O'Reilly and Glenn Beck, and no one would consider them to be journalists of any type. And I don't think any of them would ever claim they were non-opinionated "journalists," aside from the bombastic "Now let me tell you the real news" slogans.

Being an opinionated pundit is OK--people enjoy it and people get paid for it, and it's necessary for the analysis of news. Olbermann shouldn't consider himself anything else. Why MSNBC is doing so is beyond me. Apparently he was acting like a childish jerk on Tuesday night, so perhaps they wanted to knock him down a few points. I didn't see him so I don't know. In any case, what the network is doing is wrong. 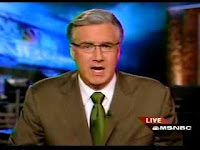 Now, suspending him for wearing that tie--that I'll support.
Posted by Crank Crank Revolution at 7:59 PM