As many of you know, I'm a sucker for gimmick crossword puzzles, specifically the Mixed Doubles in Games Magazine. So imagine my surprise when I open up the latest issue today and see this: 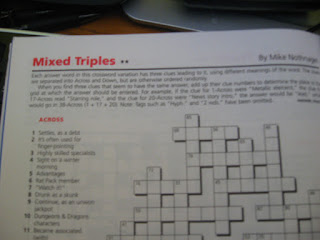 Mixed Triples? This is the greatest day of my life.

I haven't done it yet, mostly because I haven't done the previous Mixed Doubles, either. Apparently I'm not the only one that likes these because Games Magazine has one of these in either each regular issue or on the bi-monthly World of Puzzles, so they probably get a good six-eight per year at this point, I think. I am not going to complain.

Of course, this issue of Games Magazine also has the year-end Buyer's Guide to Games (i.e., the best 100 games of the year), which is becoming increasingly awkward. Partly because a list like this made perfect sense when the Internet wasn't around and the quality and amount of board games was quite different. And while the Game of the Year has, in the past, been decent (if not very spectacular), lately it's been more miss than hit, with a long string of ultimately forgettable games winning. And it's still a good list, because they do devote a lot of space to all sorts of games, such as children's games and abstract games, that get scant attention elsewhere.

In addition, for some inexplicable reason, they started doing Electronic Games of the Year. I mean it sort of makes sense for a magazine about games, but the overlap market for video games and crossword puzzles is fairly modest, but also because there are about a thousand other magazines out there that give awards for video games and do it a lot better. It seems more of a money- and attention-grabbing concept then anything else.

I'm torn about Games Magazine anymore. I mean, I still love it and will continue to purchase it, because it's more or less the only place to get quality non-traditional crosswords; you can't even get them from the internet. But the "news" portion of the magazine used to be fairly informative, and they always had one legitimate game-related article, sometimes more. Anymore, however, the quality of the articles has dropped remarkably--the current issue is about gender inequality in games. While it's an interesting topic, the article itself just isn't that good, and seems almost like the rough draft of a college required course paper. I suppose in an age where news about a specialized topic such as board games can be found instantly on the Internet there's little reason to have it in print, but I still feel there is a market for more long-view research for at least twelve solid articles a year.
Posted by Crank Crank Revolution at 5:03 PM