I've spent a lot of time reviewing food that is bad for you--mostly candy, of course. And there's nothing wrong with candy as long as you don't do what I do, which is namely eat candy as a separate meal each day.*

That said, I'm also not a fan of foods that are supposed to be healthy for you but are prepared in snack form. It's not that I don't get the point, but these things usually end up being either 1) not actually all that good for you (i.e., no fat, but full of sodium and calories) or 2) Not actually all that good (taking food that tasted bad but is healthy and rearranging the shape to make it look more appetizing even if it isn't all that much more appetizing). So I tend to look at such things with a grain of low-sodium salt substitute.

Now, this holy grail of tasty, healthy and snack-sized isn't impossible. Rice cakes manage to taste fine, and some of the whole wheat-style pretzels and crackers are pretty good. But such successes are far and few between. Suffice it to say that when I was given the opportunity to try Veggie Straws, I was not impressed.

and Snyder's of Hanover 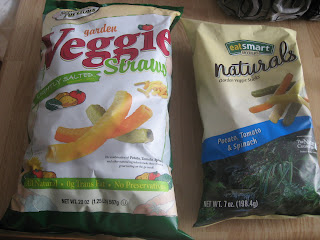 The first one I tried was the Sensible Portions brand. For some reason my wife had bought a huge bag of these at one of those warehouse chains. I was dubious at the purchase, since this is the sort of thing that gets opened once and then forgotten in the cupboard for six months. But the price was reasonable for what we got, so it wasn't a huge deal.

We didn't open it for a while, though. Each time I looked at it I couldn't possibly imagine it tasting good--it's compressed tomatoes, potatoes, and icky spinach. Even the description "lightly salted" made it sound unappealingly bland. So for months it sat, unopened on our counter.

One night, though, we broke down and decided to give it a try. 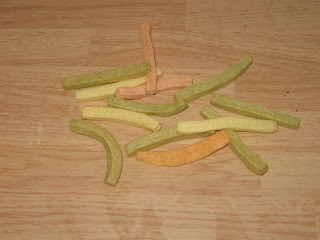 As far as snack foods go, they don't look so bad. I wasn't sure why they were hollow, except maybe for some strange engineering decision to be able to scoop up more dip. Oh no, they need a way to make it taste better--these are gonna be little bits of cardboard colored like a garden.

And, of course, they weren't.

These things are surprisingly good. They are very crisp, and they don't necessarily taste like vegetables--which may or may not be a good thing. I easily ate more than a sensible portion, and it was clearly my go-to snack for the next few weeks. These things were awesome.

Of course, there's a bit of a reality check--they are healthy, but the bag specifically states they are good in moderation. The name of the brand is Sensible Portions, for crying out loud. So just devouring the things like you would a Two-Pounder Kettle Cooked Jalapeno Crunchers is still going to be healthier, but isn't going to replace a full serving of real-life vegetables. 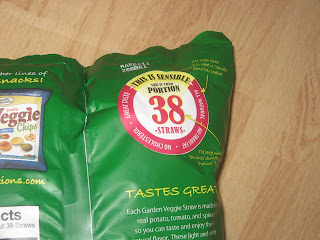 And--I won't lie--if you eat too many at once, you do kind of get tired of them quicker than you would a saltier or greasier for conventional option. It's like those baked potato chips--they're pretty good, but you have a hard limit as to when it simply becomes a chore. Given that these aren't meant to be consumed in industrial quantities, this isn't necessarily a bad thing.

In addition, none of the three flavors was really fundamentally different than the others. I wouldn't have minded a slight tomato taste to the tomato one (though the spinach one is probably best left alone.) They all kind of taste like potatoes. But all in all they taste great. In fact, during a recent gathering, someone brought a big bag of these, and it was kicked by the late afternoon.

The other Veggie Straw product is Snyder's. I happened to come across these a day or two after we bought our second huge bag of Sensible Portions snacks, and decided to give them a try. It's the same thing--tomatoes, potatoes, and spinach all pressed into snack form. These are sticks, now straws, so aren't hollow, but otherwise are the same.

The Snyder veggie snacks are also quite good. I wouldn't say they are as good as the Sensible Portions brand, but I don't really know why. Because these snacks have the consistency more of a standard potato stick and seemed just a touch oilier, I wasn't as impressed. Taste-wise, they were pretty good, and actually may be better for someone who is more used to, say potato chips. 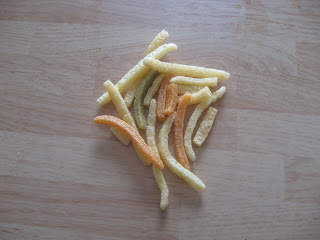 I was duly impressed with both brands. I'm not going to say that it's revolutionized the healthy snack industry, which is still dominated by crackers with wheat pressed on the top and pretzels with shaved almonds sticking to it. For someone who really isn't into healthy foods, I would genuinely suggest giving both of these a try--I was legitimately craving these over conventional snacks. If you can find a bag that isn't the size of the rations for the entire Canadian army, give them a try.


*No, I don't actually do this.Though some days it seems like it.
Posted by Crank Crank Revolution at 1:00 PM