We have trouble in our house. 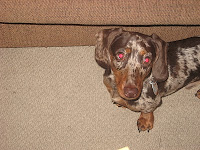 What?
SOMEONE just learned how to climb up our steps.

My dog, Dexter, has always kind of avoided the steps to our upstairs. Which is probably a good thing, because while the first floor of our house is reasonably dog-proofed, the upstairs is most definitely not. And we have a dog that while he does not chew on furniture or shoes or any of the normal things that puppies chew on, he does like to chew on cloth. As in clothes. And blankets. All of these things of which are kept upstairs.

This is new. He was OK with going down stairs, and we figured that would be fine; as long as we knew he wasn't going up, we could control him going down. However, for whatever reason, tonight he decided to give it the ole dachshund try. I let him out of his crate after his dinner to run around a bit, and realized that I had forgotten my drink upstairs. So I walk up to the bedroom and look behind me and he's there, following me with this happy-dog glazed look on his face, like he just encountered the equivalent of canine Valhalla. And he decided that he wanted to immediately hide under the bed; it took a bribe of a bone-shaped biscuit to get him to come out and go back down the stairs. I strongly suspect that was his goal all along.

Well, now that he realized he could do it, he wanted to do it ALL NIGHT LONG. He chased the cat up there, which is funny, because Nora normally taunts the dog, then hoofs it up the steps knowing that he can't follow. She became visibly cross when--whoops!--he went after her and got halfway up the steps before we caught him. And then he decided to just kind of randomly sneak up there any chance he got.

Thankfully, I think he wore himself out; he's been quiet for a while now. He's also getting to be a bit of a mouthy dog, so the barkless evening is relaxing, even if it has been replaced with naughty dog sneaking up to the bathroom. 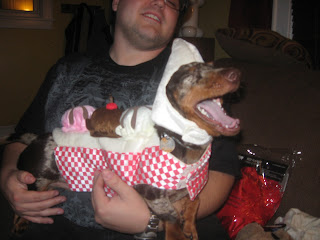 If you want to know why I'm being such a brat, this is exhibit A.
Posted by Crank Crank Revolution at 9:39 PM