Of Tax Cuts and Leaks

Posting will be a bit light for a little while. Working some different hours at work plus some reasonably heavy snow plus working on a blog-related project means my time is a bit scarce, but hopefully not for too long.

Anyway, just a few notes about current events. My thoughts about the tax cut deal can be found here. My views haven't changed much, though the political ramifications have new meaning now. I'm a little surprised that everyone is giving the Republicans credit for striking a deal--I mean, c'mon. They withheld unemployment payments, then used that as a bargaining chip to get what they wanted in the first place, even though in about a month they could have retroactively done the same thing anyway. This just saved everyone about one paycheck's worth of a slight headache. I know it's not a done deal but the whole thing seems like theater--there's a 98% chance that it's going to end up the same no matter what. Right now both sides are just fighting for seats at the big boy's table.

As far as Wikileaks is concerned--well, I don't know. Part of me is glad that, occasionally, the deep inner secrets of the government are laid bare. It keeps the government honest. However, I'm also a by-the-books kind of guy when it comes to the operation of government. If I know that a specific communication is protected, I expect it to be. And whoever is leaking this information is straight-up breaking the law. You can make the long-view case that the law should be broken to right a grave injustice, but all I've seen so far is embarrassment and grief; nothing that will right any wrongs or save any lives. In fact, it may do the opposite, and make any ongoing operations--both overt and covert--much, much worse.

That said, the case against the face of Wikileaks, Julian Assange, just seems like an old-time setup. I know the laws are different between here and Europe, especially sex law, but the timing and evidence and accusation all just seem pretty convenient. 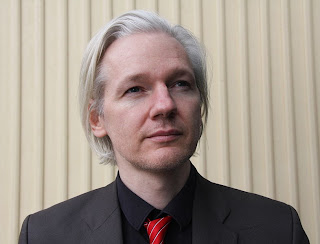 Then again, look at the guy. He's a Division I Creeper.
I think the efforts to stop Wikileaks should be towards the leaker, not the messenger.
Posted by Crank Crank Revolution at 9:49 PM