So I finally told Dexter about Santa Dog. 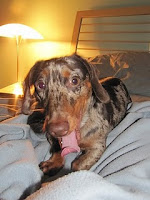 Wait. What's this now?
I told him that every year, Santa Dog comes around to all the houses that have little puppies and big dogs alike, and they get lots of treats and love. Of course, a visit from Santa Dog is incumbent on the recipient being a good dog. 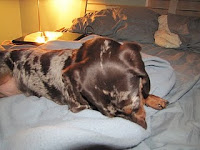 I told Dexter that if he was a good little puppy, he would be allowed all of the presents he ever wanted, which apparently is eating his own blanket and, given the volume of string I've had to pull out of his butt, is straight-up nirvana for him.

I also advised that some of the things that bad dogs do are the following:
1) Chewing on your blanket
2) Barking from six in the evening until FOREVER.
3) Going batshit crazy every time the mail lady comes. SHE COMES EVERY DAY. IT'S NOT A FREAKING SOLAR ECLIPSE.
4) Having your owner pull string out of your butt at six in the morning when it's about ten degrees out.
5) Hide behind the couch
6) Pretend he's not the one who peed behind the couch.

Something tells me, though, that even if Dexter is a little bit of a scamp, he will still get some Pork Chomps in his stocking. The stocking that he will then eat.
Posted by Crank Crank Revolution at 9:56 AM