The circus always kind of creeped me out.

Though I am not sure why. If there are three things I love, it is 1) exotic animals doing ridiculous things they should never be doing, like riding a trike while wearing a birthday hat and cooking breakfast for the Canadian army, 2) foods that are normally should not fried getting fried and possibly fried a second time, and 3) watching homeless people and meth addicts desperate for money hawking balloon animals and "souvenir" mirrors with bootleg classic rock band logos on them. So you would think that the circus would be at the top of my list. But, in reality, it isn't. 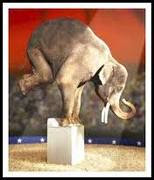 And for my next trick, I will be 500 "burgers" in tomorrow's concession stand
First things first: regardless of anything else, I love me some crazy animal shit.* What I don't like is that you have to navigate and/or endure a large amount of nonsense to get to that point. I am duly unimpressed by acrobats and high-wire acts and human cannonballs. I once fell off the bed while also changing the channel to 30 Rock and did not spill my pop, so anything those charlatans throw my way is vastly overrated. So I don't really feel like waiting twenty minutes while some nimrod wearing an outfit picked up at a roller derby outlet store juggles flaming sticks of some sort just so I can watch a tiger that reads A Portrait of the Artist As A Young Man out loud in Latin. It doesn't really seem worth it.

Zebras, Tigers, Donkeys, Bears, Lions, and Elephants all agree: they would rather be shoved in crates and fed sawdust casserole for the rest of our lives than read any more James Joyce. That guy just sucks.
I'm not one of those fellows who is scared of clowns. I don't get weirded out by them, nor am I one of those people that claims to be terrified of clowns rather than admit they're just kinda creepy and they'd rather stay home and play Black Ops than deal with parking in a field for twelve bucks. But I also am heartily unimpressed with clowns as a form of entertainment. There's a certain level of nostalgia and regret, of course; clowning is a dying art, and kids today aren't impressed by balloon animals or squirting flowers unless it can sent a message to all of their friends in 140 characters or less. Yet, they are still about one step ahead of mimes in my book, with the saving grace being that clowns will deliberately injure themselves for laughs, while mimes will just smoke a cigarette and strike for health care than lower themselves to do a pratfall.
And the food--well, the food is a double-edged sword. The food is so awful--and by awful I mean mind-numbingly delicious--that I want to eat everything, and then immediately regret my choice, whatever it may be. It does not help that most circuses are held in the summer.
Me: Awesome! This deep-fried Oreo Cheesecake on a stick tastes wonderful!
[four minutes later after walking 40 yards in 90 degree sunlight]
Me: THIS IS WORSE THAN VIETNAM.
And the games--well, the games are more or less a ripoff, and while they can be enjoyable that enjoyment tends to wear off after about two minutes or fifteen dollars, whichever comes first. And I'd be a lot more excited if the prizes were X Boxes or iPods instead of Deputy Dogs stuffed with whatever they used as a cotton substitute in the late 70's, which is when he was manufactured. 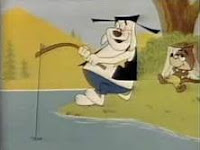 Hey, dude, it's cool. I've been livin' off of Social Security and my Army pension since Ted Turner forced me to retire.
And I won't go into the rides: I suppose they can be fun, though they're normally not my thing. But when I see the same guy with a socket wrench is also the one in charge of shoveling elephant shit into piles, I'd rather not look to see how many moving parts are in the Tilt-A-Whirl.
Despite all this, I'll have to admit that the circus can be fun in small doses. Much like anything else, of course. The problem is, with most circuses, you're all in. I'm not standing in a midway that smells like kid puke and cherry cotton candy for forty minutes and not see a donkey lick the ass of another donkey while they're supposed to be forming a pyramid. I will not allow myself to be deprived of such pleasures.

*I am using this metaphorically.Sadly, literal crazy animal shit is available in abundant supply at the circus.
Posted by Crank Crank Revolution at 2:00 PM