Imagine traveling through the desert sands trying to locate the lost treasures of ancient civilizations. Or perhaps you're up for some deep-sea diving, to recover the sunken chests of long-ago pirate battles. Will all of your preparation and determination pay off in the end?

Lost Cities is a card game designed by award-winning game designer Reiner Knizia. It was published by Kosmos in 1999. 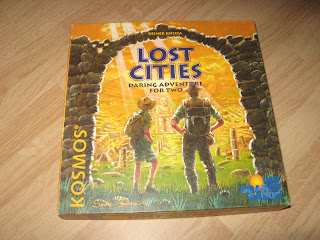 Alas, don't let my two-cent pulp-novel description above fool you--while the game is nominally about launching expeditions to unknown territories, we're pretty much talking about a card game that you could more or less play with a regular deck of playing cards with an extra suit thrown in. While that doesn't necessarily mean it's not fun, just keep in mind you won't be shooting natives with a flintlock or escaping huge boulders through the jungle; you're going to be playing cards with numbers on them.

This is strictly a two-player game. Both you and your opponent will be competing to score the highest amount of points by placing cards to maximize the value of your expeditions. The game parts consist of a board that represents five different expeditions (Arctic/White, Jungle/Green, Egyptian/Yellow, Ocean/Blue, and Volcano/Red) and 60 cards: 9 for each expedition numbered 2 through 10 and three Investment cards for each expedition. Strictly speaking, this is a card game, even though there's a board; the board serves more as a marker than anything else and isn't really necessary. 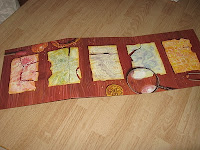 The game board: All it really does it mark the different colors of expedition. Quite useful, but not necessary. 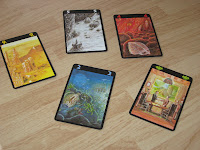 The cards. The green card is an Investment card; the others are the standard numbered cards.

Players take turns doing the following:
1. Play or discard one card from their hand; and then
2. Draw one card from either the deck or the top of a discard pile.

When you place a card, it must be higher than your previously played card.

You may discard a card instead of playing it. (You'll do this a lot; you'll see why, below). When you discard a card, place it on the board next to that color's expedition; the top card is always available for either player to pick up as their draw. (Players draw from the deck otherwise.)

This, in and of itself, is pretty simple. When the deck runs out, the hand is over, and players tally their scores.

Each player adds up the value of all of their cards in each expedition, subtracting 20 from the final total. Then, they multiply the final total for each expedition by the number of Investment cards that were played, plus one. The player with the highest total wins; games usually are three hands in total.

These are all simple rules, and easily fit on one page. But even though it's a simple game, there's a decent amount of strategy involved. Since there's only one copy of each card, players must balance the chance that their opponent is holding a crucial card for the same expedition. Since there is a 20 point penalty, players must decide whether they have the resources (and their opponent doesn't) to start an expedition that they can finish. And playing those investment cards are tricky: they pay off handsomely, but they delay getting your cards on the table, and woe is the individual who gets to multiply their negative score!

What I like about Lost Cities:
*It's simple to learn. Almost deceptively simple. The first few times I played, I worked up a fool-proof plan to win every time, and I ended up with negative scores all around. Go me!
*It's a cheap, easy "gateway" game that girlfriends and/or wives tend to enjoy.* Lost Cities has been considered the quintessential SO-friendly game--there is competition, but it's not direct, and hands play so quickly that an awful or frustrating game is easily forgotten
*There's a surprising amount of strategy with what amounts to a souped-up standard deck of cards. The investment cards in particular are good--they can really pay off greatly, but if you invest too much or wait too long you'll find yourself well in the hole, and it's hard to recover from that. The thing that makes it interesting is you pretty much have to make this judgment at the beginning of the hand.
*The last few turns can be legitimately tense. When you're counting how many cards are in the draw pile and how many are in your hand, you suddenly start doing damage control, minimizing your loss while poring over the contents of your rival's cards.

What I don't like about Lost Cities:
*Being a quick, simple, easy game has its drawbacks--while there's room for strategy, it maxes out pretty quick. Because it's not a long game this isn't a huge issue, but burnout may be a factor.
*The theme is pretty weak. This could easily have been about nearly any other subject and the rules of the game wouldn't be much different.
*A small quibble given the game, but the scoring is a touch convoluted. I'm glad they did it the way they did, because the rather unique scoring mechanism is what makes the game. Hardly a turnoff, but it's the last thing I want to do before hopping into another round...

From an efficiency standpoint, it's a great game--for what you get, there's a lot of game in there. But there's a hard limit as to how much fun you can have with limited options. Lost Cities is a very good game and is especially good for casual gamers, but anyone looking for a game they'll play for a long time may have a need for something stronger. I assign it a B. Your enjoyment may wane after a while, but given the low cost and short play time it's still getting you an awful lot of fun for your time and money.

Note: There is a Lost Cities: The Board Game; I've never played it, but it is similar in style.

*This is a benefit under the reasonably accurate assumption that a lot of women don't like to play board games. That may be another discussion for another day. And "gateway" games are those that may progress onto other, deeper games.
Posted by Crank Crank Revolution at 3:32 PM