Candy Review: Way Too Many Types Of Snickers Bars

It's a common theme for candy manufacturers to take a tried and true formula and put a twist on it, as evidenced by M&Ms and Twix (among many others.) Add to that list Snickers, who for the last few years have been cranking out variations for the sugar-loaded consuming population.

For our review, we have five types of Snickers bars: 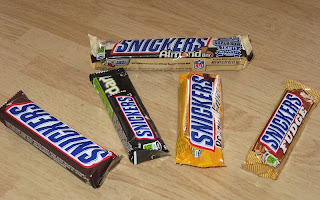 I swear, there are more Snickers bars than Jackson siblings and Kardashians combined.
The five flavors are:
Snickers (Standard)
Snickers Dark
Snickers Peanut Butter
Snickers Fudge
Snickers Almond
(For some reason, I couldn't find any Almond Snickers that weren't King Size, so I had to consume it anyway. For science.)
So how do they stack up? Well, here are my thoughts:
Snickers have been around for decades, so there isn't any new surprises here. I've always liked Snickers, but it was never my favorite; I don't care for caramel and a little bit of nougat goes a long way for me. But--so help me--their commercials are right. If you eat one at just the right time, it can really hit the spot and sate my hunger. But most of the time, if given other options, I'd rather get something else.
Snickers Dark is more or less the same as a Snickers bar, but the outside coating is with dark chocolate. I am not a fan of dark chocolate*, and I'm certainly not a fan of slapping said dark chocolate on an otherwise perfectly decent candy bar. So I wasn't impressed with this, but then again I know a lot of people prefer dark chocolate. If you are one of those heathens, this may just be for you.
Snickers Peanut Butter had the most potential, since if you take the amount that I hate dark chocolate and multiply it by one million infinities, this is how much I love peanut butter. Alas, this was a disappointment. Theoretically it should taste good, but it seems to have just as many peanuts as a regular Snickers bar, and I don't really taste a significant amount of peanut butter. At best, it seems like they just replaced the caramel with peanut butter, and not much at that. The worst part is that they advertising AS A BENEFIT that it is 'peanut butter squared," and you open it up and you see this: 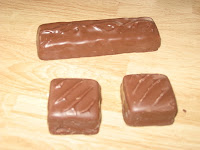 The top is a regular Snickers bar, and the bottom is what is known in the confection industry as "a ripoff."
Snickers PB actually tastes pretty good, but there isn't an overwhelming difference between them except that you pay the same amount for less product.
Snickers Fudge is one I wasn't sure what to think about. I like fudge but not overwhelvingly so--and it doesn't help that for some reason when I was a child I routinely mixed up fudge and brownies** so was always disappointed either way. And, truth be told, I couldn't tell much difference in this case between a regular Snickers and the fudge Snickers. It was a little more chocolaty but not excessively so. It was good.
Snickers Almond is another I wasn't sure what to expect. I'm not a fan of almonds, but they are good in certain things, and I thought a Snickers bar would be one of those things. But I really couldn't tell a significant difference--there's just too much nougat and chocolate and caramel for the difference between almonds and peanuts to stand out. Still good, just not much different.
The verdict? Basically, these are all Snickers bars. With the exception of PB and Dark, they all taste pretty much the same. And Dark isn't significantly off the mark. They are all good, but if tomorrow they were all discontinued, I don't think it would make much difference.
*For the record, dark chocolate is made by taking regular milk chocolate and adding puppy blood and broken dreams into it.
**Cut me some slack. They're both chocolate, they look identical from above and they use the same pan!
Posted by Crank Crank Revolution at 12:37 PM