A few weeks ago I purchased for my wife a box of Fleury Flakes, a wonderful novelty cereal commemorating the star Pittsburgh Penguins goalie, Marc-Andre Fleury. They're really just frosted flakes, which in and of itself isn't a bad thing.

Hopefully having your own cereal and winning a Stanley Cup will more than compensate for being about four feet tall.
My wife, however, came up with a brilliant proposal: add in hockey pucks, which would be small chocolate marshmallows. This would have 1) been thematic, and 2) made boring sugared corn flakes into a bowl of awesomeness. And, really, if part of a nutritious breakfast is lacking anything, it's more ways to introduce refined sugar.

So I had thought it would be a good idea to give this a try, and since the Internet is the global supermarket, I set to find and order a bag of chocolate marshmallows, hopefully circular like hockey pucks. To my surprise and horror, chocolate dehydrated marshmallows are not available anywhere on the internet. I was able to find white marshmallows and Lucky Charm ripoffs, but no chocolate, even non-puck-shaped. I was floored, because there are things you can find on the internet that don't. in reality, exist. How could a form of chocolate not be available?

Now a caveat: I basically searched through five pages of Google search results wording "chocolate dehydrated cereal marshmallows" in every conceivable way. It's possible I just didn't word it the appropriate manner, but I doubt it; I assume at this point any chocolate marshmallows hidden this deep on the internet are getting shipped from some Namibian warehouse where they are actually made out of Splenda, rum and compressed rat tail grindings.

So this is my million dollar idea: Manufacture and sell dehydrated chocolate marshmallows. Clearly, there is a market gap for it, and I can guarantee there is a demand for it: the world will never run out of children, college aged men, or menstruation. Setting up a Chocolate Marshmallow Dehydrating Facility in my home is now on my bucket list.

In the meantime, the only option I have right now is to buy Count Chocula in bulk, sort out the marshmallows, and pretend that the Flower is playing some mutant X-Men hockey where the pucks look like godzilla feet. 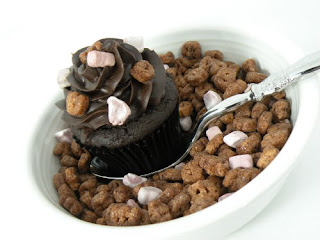