Last Friday, the Pittsburgh Penguins and the New York Islanders got into a massive slugfest. Over 346 penalty minutes were assessed, and at the time the last buzzer sounded there was a grand total of 15 players (from both teams) still on the bench, everyone else having been ejected. The Islanders won by an embarrassing (for Pittsburgh) 9-3.

"Embarrassing" is a good word to describe pretty much everything that happened that night. It also sparked a fierce debate about the role of fighting in hockey. So, of course, that leads us to the question: should fighting be banned in the great state of hockey? 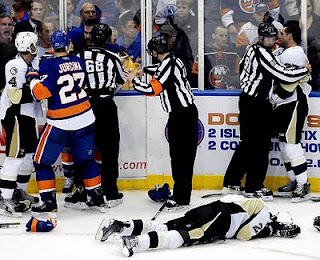 , by Ross Bernstein. I didn't think much of the book at the time--good enough, but it was mostly repeated anecdotes from long-ago players about fights and would have made a much better full-length magazine article than a book. But much of what was hashed out in that book was brought up again, and is certainly worth look at again.

All-out brawls like this seem to pop up every once in a while each season, so it's not like it's a rarity; but usually it doesn't involve teams with skilled players. Every team has their bruisers on the roster, and every player knows to be ready for a fight at any time. Still, hockey is the only professional sport that allows fighting and is written into the rule book. We don't let basketball or football players do this, so why do hockey players get a pass?

1) The fans love it. This is true, because I love hockey fights, and therefore, since I am representative of all worldwide individuals, hockey fights must be popular (but see below).
2) It is part of the hockey culture. Canadians have been fighting on ice for nearly a century, and it is simply part of the game.
3) There is a certain level of justification for fighting as a policing mechanism. Unlike most other sports, in hockey it is very, very easy to "accidentally" hurt other players, and there isn't much of a method of determining intent. Because players are always in motion and checking is a valid hockey move, the fine line between a standard hit and a viscous one is easy to cross. Refs can't visibly tell what players can feel, so players can "work it out" with their fists if too much goes on. The threat of a fight is often enough to keep the clutching and grabbing from getting out of hand.
4) There is the code mentioned above--despite what people believe, there is a rigid set of informal rules that have developed over the course of the years that all hockey players more or less follow.It isn't a free-for-all.

Of course, there are reasons not to have it:
1) Point number 3 above just seems like an excuse. Refs are there for a reason. If it's that bad, write it in the rulebook and start throwing clutchers in the sin bin.
2) While hockey fights tend to be crowd-pleasers, there is a train of thought that it's also hurting their growth. Canadians, Detroit, Pittsburgh, and New York teams are spoiled; most of the rest of the league is struggling to put fans in seats. Getting a Gordie Howe Hat Trick might get the Joe Lewis Arena all whipped up, but potential fans in Anaheim and Dallas might still think of hockey as a live-action performance of Slap Shot. (Although--c'mon. Dallas is not a fan of violence? Pul-leeze.)
3) With a greater awareness of things like concussions and paralysis in professional sports, encouraging bare-knuckle fighting seems absurd.
4) Olympic hockey and most European leagues don't permit fighting, and they seem to do pretty good.

Me, I think fighting is good for the game, but too much of a good thing can get pretty rough. Before the lockout in 2004-2005, hockey games became scoreless snorefests, and crowded scrums replaced real hockey on the ice. Since the penalty rules were revised after the lockout, it seems as if the NHL has reached a happy medium. You might see a good old-fashioned hockey fight every third game or so, and a few times a season you'll see a bench-clearing brawl. (Well, not really--leaving the bench is an automatic 10-game suspension. Few pros are willing to pull that trigger). So fans get to see real, skilled hockey most of the time, but still get to see a good fight once in a while. And there doesn't seem to be anything wrong with that.
Posted by Crank Crank Revolution at 9:40 PM