...but that doesn't mean she can't be wrong.

Fey recently wrote an article for the New Yorker about how she juggles having a child and a career. It's actually a humorous article (which can be found here, but it requires a subscription), but a part sticks out for me (warning: swear words):


I know older men in comedy who can barely feed and clean themselves, and they still work. The women, though, they’re all “crazy.” I have a suspicion - and hear me out, because this is a rough one - that the definition of “crazy” in show business is a woman who keeps talking even after no one wants to fuck her anymore.

The only person I can think of who has escaped the “crazy” moniker is Betty White, which, obviously, is because people still want to have sex with her.

This is the infuriating thing that dawns on you one day: even if you would never sleep with or even flirt with anyone to get ahead, you are being sexually adjudicated. Network executives really do say things like “I don’t know. I don’t want to fuck anybody on this show.”

I can understand her frustration, but she seems to be forgetting one major detail--she works in Hollywood. 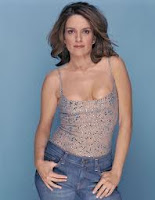 This industry can be so male-dominated and demeaning! By the way, can I get some more glitter for my cleavage?
Hollywood is a shallow, hypocritical place, and there isn't anything wrong with trying to make things right. But the entertainment industry by definition--the "show" in show business--relies on looks more than performance. Of course older women aren't getting job offers--Hollywood is all about youth and sex appeal. When a producer mentions that quote above, it is a legitimate concern--people want to watch shows and movies with attractive people. It may not be fair, but it's the culture that Hollywood has built, and it's what viewers want to see. You can't hand-wring your way to making this change.

The sad fact that professionals in Hollywood don't want to admit is that there is a very, very fine line between "making it" and waiting tables. There are thousands of perfectly good actors in this country that will never act because they don't have the connections, agents, or timing to do it. Many of these people are probably better than the actors getting jobs. (Yes, I'm looking at you, Nicholas Cage. Tell me, how did you get this gig again?) When you are in a creative endeavor, ability certainly counts, but there is always much, much more supply than demand. This has always been the case, so it's not very surprising to know that capped teeth and a D cup will give you an extra edge.

It also doesn't hurt that Hollywood is practically the only discrimination-endorsed industry. Since everything is creative, you can easily deny people jobs based on looks, nationality, disability. etc. (This doesn't stop celebrities from lecturing the rest of us, of course.) I don't fault them for that, of course, since it's necessary given the product. But you have to take the good with the bad, and the bad is that sometimes life isn't fair.

Of course, Fey is confusing things a bit. She talks about the industry and lumps writers, producers, and actors together. They're all creative, but only actors are onscreen; it just so happens that Fey transcends all of these roles. Could it be that even in the writer's rooms are nothing more than a sanctioned men's club? It's possible--Fey certainly knows more about it than I do--but I think it's more of a youth bias than a men's bias. I distinctly remember the writers of M*A*S*H and Cheers unable to secure new work because they hit their expiration date--i.e., 30. It may seem more acute to Fey since Hollywood has a bias against older female actors, but the same happens for writers who are older men as well. This is an important point, since it somewhat diminishes her point.

It's easy to pick on celebrities, and I'm no exception--people who are writers belong to a pretty exclusive club, one where they also get to do a job they love that also gives them a certain degree of fame and wealth; this is a luxury very few people get. The fact that there are a thousand hungry writers who are just as talented banging on the door sometimes seems lost to some of these people, and this often comes across as being ungrateful. And maybe it's just me, but the whole "Hollywood hates women" idea is getting old. So to speak.
Posted by Crank Crank Revolution at 1:15 PM