The Intangibles: A Prediction For Super Bowl XLV Based On Things That Don't In The Least Bit Matter

Unlike all of the other major sports, football doesn't have a playoff series--it's just "The Big Game," as advertisements for products that do not have a license agreement with the NFL are fond of calling the Super Bowl. As such, while there is room for legitimate analysis of statistics to determine who is likely to win--something Vegas has down to a quite profitable science--a lot of it comes down to what amateurs and armchair coaches call "intangibles." Those things that just can't be put down on paper or crunched through the statistics. The sort of nonsense that mediocre coaches--or the revised histories of legendary coaches in made-for-TV movies--use in pep talks to the team during halftime.

I've never quite got that. Who will win, they say: Which team has more "determination." Who has the most "motivation." What players are really "in it to win it." Really? This is the Super Bowl. Do they really need any extra psychological boosts?

Re: The Super Bowl

This is simply a friendly reminder about the Super Bowl this weekend. You know that thing that you've been dreaming about every day of your life since you were like four years old? Well, it's coming up here in a few days just in case you've forgotten about it. I don't mean to be a naggy-noo, but I just don't want you guys to forget.

I have a copy of Who Moved My Cheese?  in my office if anyone wants to borrow it. If anyone has any problems getting pumped up for the one single event you have spent your entire life preparing yourself for, I have a spiral-bound booklet of team-building exercises we can all do.
In closing, I thought you guys might enjoy this: 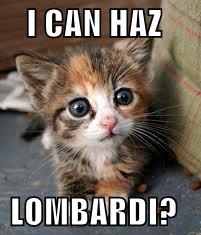 Well, we are nothing but mediocre amateur armchair coaches here at C2R, so we've cooked up our own list of the most important "intangibles" for Sunday games. No statistician will be able to quantify these; no expert can expound poetically about them. But they are important, and they provide some pretty good excuses in case your team loses if you don't feel like admitting they just played like shit.

1. Weather
Both Pittsburgh and Green Bay are cold-weather teams. Pittsburgh has an open field that is used to snow, especially during playoffs. Things can get pretty chilly being right next to the river, and cold fronts from Lake Erie have a tendency to hit the Steel City with piles of snow at inopportune times on Sunday afternoons.

On the other hand--it's Green Bay. The home of  the Ice Bowl. Lambeau Field's nickname is the Frozen Tundra, for crying out loud. This is Wisconsin, where the official state tree is snow.

The Edge: Green Bay. The only thing that stays consistently under 32 in Pittsburgh is the Pirates' record.

2. Mormons
If there is one demographic that seems to be overrepresented (in proportion to the population as a whole), it's Mormons. I have no idea if any of the tenets of the Church of Latter-Day Saints are pertinent to the development of the 3-4 defense. But for some reason they crank out quality players every year.

As such, if my sources are correct, Pittburgh has two Mormons (Brett Keisel and Chris Hoke) while Green Bay has one (Brady Poppinga). Granted, no one has to fill out a Your Denomination Here blank on their NFL application form when they sign up, so there may be some super secret Mormons on either team. But this is the best guess.

With the possible exception of the Polynesians--of which the Steelers are also well-stocked--you won't see a bigger powerhouse in the NFL. A diverse team is a strong team, and the Mormons more than hold their own. And, yes, this will be the only time you will ever see the words "diverse" and "Mormon" in the same sentence.

The Edge: Steelers. The North Shore is almost ready to be certified as Little Utah.


3. Hair
Hair is, surprisingly, a decent barometer of victory on the field. As a recent example, the Pittsburgh Steelers were well-coiffed enough to win, when the Baltimore Ravens really only had Joe Flacco's eyebrow. But for the Super Bowl, things are a lot more competitive. Pittsburgh has: 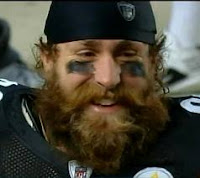 While the Packers have Clay Matthews:

The Edge: Close to a push. While the photos above are accurate, they are also misrepresenting the sides; the Steelers are remarkably well-shorn, while the Packers seem quite normal. Maybe they all have their winter coat of fur on. But, one team has Polamolecules and the other doesn't. Guess which one wins?

4. Mascots
Both the Packers and the Steelers are good, solid, no-nonsense teams. They don't mess around. They don't need cheerleaders or fireworks or bobblehead nights to get their fans out to the game. With the exception of a 30-year-old tangerine-colored dish towel and a hat shaped like a wedge of cheese, both cities treat football like serious business.

So many Steeler fans were kind of shocked when they came out with a mascot a few years ago. Now, some mascots are easy to figure out--the Buffalo Bills have a cartoonish Buffalo, the Detroit Lions have a pantomime Lion, the Cincinatti Bengals have Chad Johnson--but what, exactly, would a Steeler be? Well, I suppose it would be exactly what it sounds like--a vaguely Bill-Cowher-shaped steelworker. Which sounds pretty boring, because it kinda is. And the name didn't help: after a contest, the winner chose "Steely McBeam," which doesn't exactly roll off the tongue. (Though I suppose it's better than more accurate Pittbsurgh alternatives, like a PennDOT worker named "Stoppy McNowork" or a pharmaceutical sales representative named "Moved To Georgia In The Late 70's Bzorsky.") He carries around (what else?) a big foam I-beam. The kids love him, I guess, so he's not all bad. But it's hard for a mascot like Steely to get the fans revved up when all he really does is remind everyone of a metrosexual uncle who was laid off two decades ago but still gets the union newsletter. 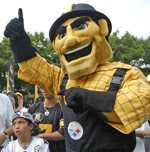 "If I end up coaching the Panthers next year, y'all be the first to know."
But then, Green Bay has no mascot. No caricature of Vince Lombardi racing around telling his players they can either watch the birth of their daughter or play in a preseason game against the Baltimore Colts and keep their job, but not both. No Hungarian immigrant running around getting the stadium excited by spending fourteen hours a day scraping up excess cow parts into a pile for soup stock for twelve cents an hour.

The Edge: Steelers. Despite what you think about poor Steely, at least he's better than nothing.

5. Nicknames
The Green Bay Packers are popularly known as "The Pack," which is a nice, short, and quite accurate description of the team. It also lends itself to easily constructed headlines and T-shirt slogans--Leader of the Pack, Pack Attack, etc. It's a graphic designer's dream.

The Pittsburgh Steelers don't have such a snappy nickname. The closest they have is "The Stillers." Linguistic anthropologists may disagree, but it just makes us sound like we don't know our alphabet.

I am ignoring, for both parties, "Black and Gold" and "Green and Gold." Those are not nicknames. Those are eBay product descriptions.

The Edge: Green Bay. Even the city name is more conducive to marketable slogans and color schemes.

So which team will come out ahead? Well, according to the intangibles, it looks like the Steelers by a squeaker. Sure, you may complain that this is hardly a scientific study, but how is it any worse than the guy on television stating such things as "When the team that has the most field goals by the second third of the fourth quarter is ahead by the number of wins they have in the season or number of sacks in the game so far (whichever is greater) has a 4 out of 7 chance of winning a non-overtime game"? Seriously.
Posted by Crank Crank Revolution at 2:07 PM