As I have mentioned before, the Pop Tart Manufacturing Company had done good in creating the Pumpkin Pie Pop Tart, with the only drawback being that it was considered a Limited Edition recipe.  So last fall I grabbed a few as they became available and, sure enough, right around the second week of December they were all gone.

Fast forward to today, when my wife foolishly permitted me to go grocery shopping. Between the time I was dropping Sudanese orphans off at the Free Nintento DS Store and handing a fat check to the Save The Endangered Pink Koalas Foundation, I ran into Big Lots* to get some treats for the dogs. And lo and behold, I found something amazing: a book about constitutional reform by noted political scientist Larry Sabato.

But later, I ran across this: 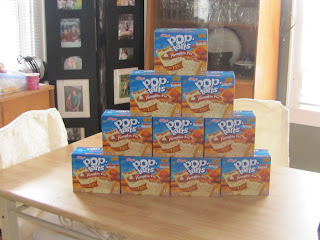 That is ten--count 'em--ten boxes of Pumpkin Pie Pop Tarts, and the fire sale price of a buck eighty per box. This was a deal that I literally couldn't pass up--as in my physiological makeup would not permit me to walk past the shelf without dumping them all in the cart.

To be fair, now--I didn't clean out the store. I only took ten of the twelve available because--c'mon. Twelve would be too many. I'm not a charlatan.

Here's a different picture my wife took. And here's one of me recreating what would happen if Drew Carey tried to pawn these off on The Price Is Right. 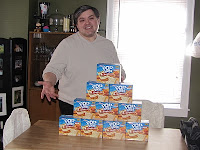 *For those who don't know, Big Lots is a store that specializes in overstock items--also known as weird stuff that wouldn't sell or awesome deals on normal but oversupplied (i.e., nearly expired) items.
Posted by Crank Crank Revolution at 12:38 PM