The world is on a brink of disaster. Populations are getting sick and dying out. Unknown mutations have nations at the mercy of nature. Can you handle the pressure of saving the world, one test tube at a time?

Pandemic is a cooperative game for two to four players. It was designed by Matt Leacock and published by Z-Man games. 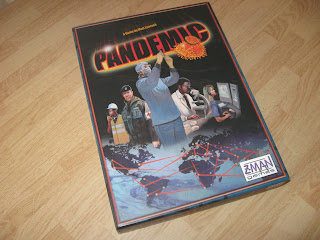 In Pandemic, each player is trying to help cure four strains of virulent diseases--represented by cubes--while also halting the rapid spread of each disease.  If all four cures are found, everyone wins; if not, everyone loses (and, presumably, dies).

That's the most important thing to remember about Pandemic: it's a cooperative game. Players aren't competing with one another, but rather against the mechanics in the game.  Most people aren't used to non-competitive games, and many may mistakenly believe this lack of competition to be boring. Trust me, it's not. 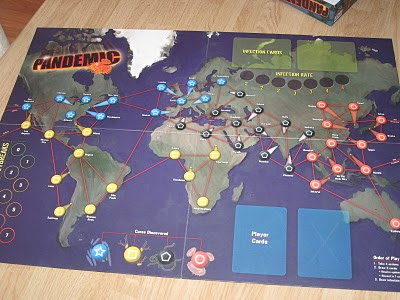 If you live in any of these cities, stock up on zinc lozenges.
Each player takes on one of five roles. Positions such as Scientist (who can find cures easier) to the Medic (who can cure diseases more efficiently) each have their own strength. Each player is randomly assigned one of these roles. 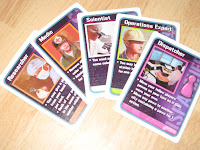 Each of the five Role cards.
Then, each player can take four actions per turn. These actions include moving, removing a cube, building a research center, or curing a disease. Normally, players can only move from one city to another adjacent city, but playing certain city cards allows players to move farther; in addition, travel from one research station to another is also allowed. After all four actions are taken, a player must draw two cards, and then must discard if they have more than seven cards in their hand.

Each card represents a city on the board. (There are five special cards that have bonuses.) Some additional cards are Epidemic cards, however, which are bad; see below. Each city is of a specific color (North American and Europe are blue, South America and Africa are yellow, Asia is Red, and Russia/Indian Subcontinent is black); normally a specific disease will only appear in its region. Collecting enough city cards of the proper color allows you to cure that disease; however, having specific city cards allow you to travel more efficiently and also build research stations. 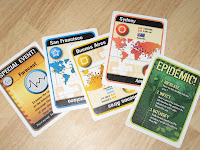 A special event card, three city cards, and an Epidemic card.
After cards are drawn, a player turns over Infection cards. Infection cards have one city on it. A player simply places a cube of that color disease to be placed in that city. For example, a player who turns over Hong Kong would place one red cube in that city. As the game progresses, more cards are turned over per turn.

I say "simply," but, in reality, this simple mechanic is alarmingly creative, because there are two other factors at play. First is when there is an Epidemic. When an Epidemic card is drawn, the rate of infection increases, one new card is drawn from the bottom of the deck and all of the discarded cards are reshuffled and placed on top. This doesn't seem very impressive on paper, but what happens is that the cities that just got infected is going to get infected again, very soon. And by drawing from the bottom of the deck, you may have introduced a new regional disease into the shuffle. 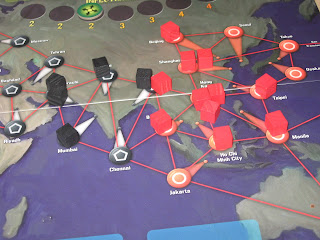 A partially infected region.
The second thing is that no city can get more than three of the same color cube at once. If a fourth cube would be placed, it actually spreads to each adjacent city. And if any of those cities then hit four cubes, they spread as well. Chain reactions can occur very quickly with the placement of just one cube.

A cure is found by having one player hold five cards of the same color in a city with a research station. Once a cure is found, however, the disease can still spread. It becomes significantly easier to clear up the cubes from the board once a cure is found, but until all cubes are removed it still spreads like normal. Once all cures are found, the game is over; everyone has won.

Players just getting into the game aren't sure what to do, so there is a lot of experimentation involved. It quickly becomes apparent that those city cards must be used efficiently and discards minimized. Since transferring cards from one player to another is possible but very difficult, players have to make the best decisions based on the cards that they draw, and everyone has to work together to balance stopping the spread of disease with finding cures.

The rules state that players shouldn't reveal the cards they have in their hand; this may seem odd in a cooperative game, especially since everyone can simply tell everyone what is in their hand. Trust me: you want to play this with hidden cards. Why? Well, the designers want to encourage players to discuss options with a certain level of hidden information. But--in my opinion--it's more important to move the game along. If everyone has all of their cards face-up, each turn each player is going to look at each card in everyone's hand, grinding the game to a boring halt. By forcing players to ask appropriate questions and allow players to suggest options, it makes the game be more fun and move faster.

What I like about the game:
*The rules are reasonably simple. While there are something like eight different types of actions you can take each turn, they're all pretty self-explanatory. The spreading of diseases and the infection deck are a little convoluted, but the steps required are listed clearly in the cards.
*While the rules are simple, the execution of what everyone should be doing is not. Discussing how to go about accomplishing the many self-defined goals ("Someone needs to get to South America soon! Who is best able to do that?" "All we need is for either me or you to get one red card and we can cure it, but neither of us should move very far away...") is one of the more fascinating parts of the game.
*There's an easily integrated difficulty setting. Depending on how difficult players want the game to be, it simply requires the addition or subtraction of a few cards.
*Everything is almost exactly right from a balance perspective--there are a perfect number of cards in the deck that the game isn't too short, but still leaves a lot of pressure as the deck gets smaller and smaller.
*The game is very tense. One cube can quickly grow to two, then three, then half of a continent is on the verge of collapse. Being able to manage the unexpected is part of the game.

What I don't like about the game:
*Cooperative play is not for everyone. It's not hard for one person to dominate all of the decision-making, which sucks a lot of the fun away from the game.
*Since this is a cooperative game, there is more than the normal amount of randomness--you can play the best game, but you don't have any control over what happens. A lot of this luck is mitigated--players know what cities the diseases will appear in, just not the timing or frequency--but it's still a prevalent part of the game. This game is largely about reacting to random events, and not everyone really enjoys that.

Really, those two disadvantages aren't anything that bother me, so I heartily enjoy this game. There aren't too many cooperative games out there, and Pandemic is just easy and short enough to draw people in to new territory. It's also reasonably cheap. While it's not something that everyone will enjoy, and it's not a game I would play over and over again in one sitting, it's one of those designs that is simply efficient in the amount of rules, complexity, playing time, and engagement. I rate this game an A.

Note: There is an expansion called On the Brink

, but I have not had a chance to play it yet.
Posted by Crank Crank Revolution at 9:27 PM