The Best Decision Ever

So this weekend has left my internal schedule to be a little bit...off. Not for any earth-shattering or particularly negative reason, but mostly because we made some decisions that threw my personal well-being for a tailspin.


Basically, early on Saturday, I asked my wife if she would like to go to the Eat 'N' Park Midnight Breakfast Buffet. This seemed like a grand idea, so we planned our entire schedule around it--as in we ate a late lunch and no supper, and we both took brief naps so that come midnight we would 1) want to eat massive amounts of food and 2) be wide awake and ready for some hot buffet action.


[For the record, if you think that planning your day around a midnight buffet makes us sound old and just a little weird, then you are missing out. Charlie Sheen is jealous of our lifestyle.]

For those that are unaware, Eat 'N' Park is a reasonably standard sit-down family restaurant in our area. Its main claim to fame is the Smiley Cookie, which is a sugar cookie with a big smiley face on it. I'm not a huge fan--I mean, it's a sugar cookie, which isn't bad, but for all the awesome things they could do with it (like add chocolate or peanut butter or ANYTHING ELSE besides glazed sugar) they seem unnervingly reluctant to experiment beyond making them in the shape of Easter bunnies or shamrocks. 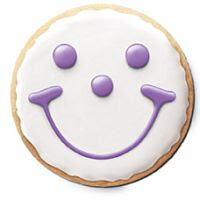 Besides the impending buffet, the weekend had so far had one up and one down--an aborted airing of The Walking Dead

that my wife forced us to stop watching being the down, all because she thinks [spoiler alert] smearing dead carcass all over yourself crosses some arbitrarily-defined line of taste. Boo hoo, I say.

The up part was the fact that I aced a game of You Don't Know Jack that had both a question about how long the gap was in the Watergate tapes and what year the Berlin Wall fell. It was like the Wii was speaking directly to me.

Right before we left on Saturday night it started to pour, and my wife lost the lens cap to her camera* on a last-minute photographical excursion, so things started off wet and sullen. Well, shortly, we showed up at the nearly-empty restaurant where we had a free run of the buffet for like a half an hour until the usual skankfaces and drunks staggered in. I fell into the trap of loading up on corned beef hash, which is 1) very good but 2) very filling, in as much that about halfway through the mountain of salty beef and potatoes I was ready to throw in the towel. But just like William Wallace, Rudy, Akeelah, and the bee, I wasn't about to give up--and, sure enough, I conquered that hash, along with eggs, toast, and chocolate mousse. Not all together.

Alas, much like the Iraq War or watching The Holiday, it didn't take me long to realize that Mistakes Had Been Made. The drive home was a long, somber one, where at any given time the cosmos of the universe was going to roll doubles and I was going to expel my recent culinary trophy. I made it home, however, and at the tender time of two in the morning I finally dozed off to sleep.

Of course, the following day, I woke up reasonably late and not at all hungry. Which didn't stop either of us from eating lunch at 10:30 in the morning. (Technically, it was brunch, but I'm not sure a spicy chicken sandwich technically counts as a recommended brunch item.) And that lunch included a Coke that should have been a Diet Coke--I haven't drank a regular cola for a few years--so I spent most of the day sugared up, full, and (according to the dogs) cranky. Of course, an afternoon nap--which, oddly, is not a normal occurrence for me--was the casualty of my sugar crash.

Needless to say, at this point both my appetite and my sleep schedule are all screwed up, and I anticipate some dissonance from my physiological signaling system. Still, being out with my wife for a midnight meal was, hands down, the best decision of the weekend.

*Thankfully, a crisis was averted, when a rescue mission was formed and the lens cap retrieved the following day, in much brighter and drier circumstances. The nation was saved for tyranny.
Posted by Crank Crank Revolution at 8:59 PM