I do believe my dogs are trying out for Ocean’s Eleven.
Chloe is currently in her barking phase. She barks when she needs to go out which, partly because she’s still a puppy and partly because she is female, appears to be approximately every fifteen minutes. Of course, she also barks when she wants attention, or if she just woke up, or if she is just about to go to sleep, or if she is awake. She barks. A lot.
Dexter, on the other hand, grew out of his barking phase quite a while ago. He will only bark at the mail and the cat. Neither of these things are unusual because he only sees them every single day of his life. However, one habit he had not grown out of is chewing his blanket. We have tried to keep him occupied by giving him lots of Pork Chomps, which have been wonderful, but in the past year or so he has also picked up enough XP to become Pork Chomp Devourer +10 Master, making it difficult to keep up. 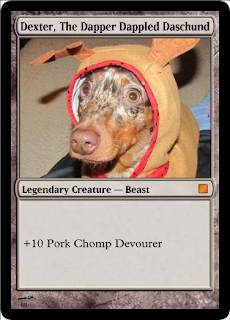 He does not care for all the tapping, though.
Other chew-related toys don’t work so well, because Dex appears to be uninterested in recognizing that thin but important line between “digestible” and “colonic nightmare.” (Note: Colonic Nightmare would be a great name for a band.) So my wife stopped at the store one day to get him some Pork Chomp-related items that may last a little longer. So far they have done their job well, but if it were up to Dexter he would simply chew and chew and chew until his teeth are ground down to nubs or his stomach looks like the bottom of a coral reef. So at night we take the chew toys off of him.
Well, the most successful chew—the definition of which means he hasn’t successfully swallowed the entire thing in a half hour yet—is something I call the Smoky Donut. (Note: Smoky Donut would be a great name for a bar.) Basically it is a donut-shaped thing with something that smells like either Liquid Smoke (according to my wife) or an electrical fire (my take). Dexter loves it and I once caught him sleeping on top of it with his head cradled in the donut. We still have to take it from him at night and put it on our living room table so we don’t wake up to see a wiener dog with a donut-shaped bulge halfway down his stomach. 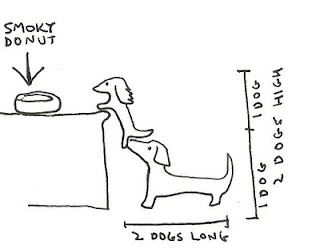 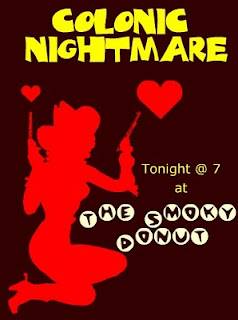